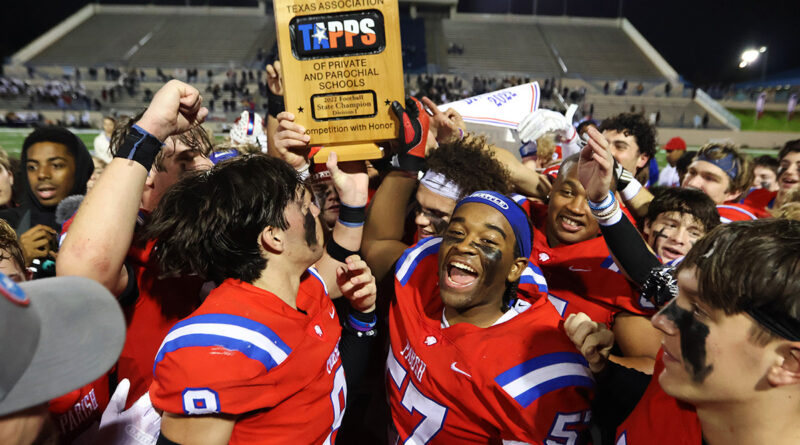 With a decisive 38-14 victory over Plano Prestonwood, the Panthers made history by joining a group of just 12 Texas programs — public or private — to accomplish that title feat.

“Just saying it out loud is unbelievable, knowing we’re one of 12 teams to do something like this,” said Parish head coach Daniel Novakov. “Our guys were locked in from the start. The defense was outstanding, and the offense made several big plays to get us going.”

In a rematch of a game that Parish won 42-14 in the regular-season finale on Nov. 4, the song remained much the same, as the Panthers (12-1) broke open the game with a 24-point second quarter and never trailed.

Sophomore quarterback Sawyer Anderson passed for 256 yards and two touchdowns and ran for a score. He threw a 42-yard touchdown strike to Chase Burton on the first drive and later found Cedric Mays for a 69-yard score.

“Last year, it was the defense that got us started with our first touchdown,” Anderson said. “This year, we just wanted to return the favor and let the offense come out and set the tone.”

Daniel Demery, the only Parish senior who has started on all four championship teams for the Panthers, had an interception return for a touchdown.

“I’m happy for our entire senior class as they played a big role in these last four years,” Novakov said. “It’s also a bit sad knowing I won’t get to coach those guys anymore; they are all great kids.”

Parish prepared for this moment with a nondistrict gauntlet, including four public-school opponents who combined for a 58-3 record and two UIL state titles last year. Their only defeat came against powerhouse South Oak Cliff.

Since TAPPS play began in early October, Parish’s eight straight wins have come by an average margin of almost 35 points per game.

“So much credit for this season goes to our kids and coaches for the work and time they’ve put in all year long,” Novakov said. “We’ve got some of the best coaches in the state that work so hard to get our guys prepared every week.”