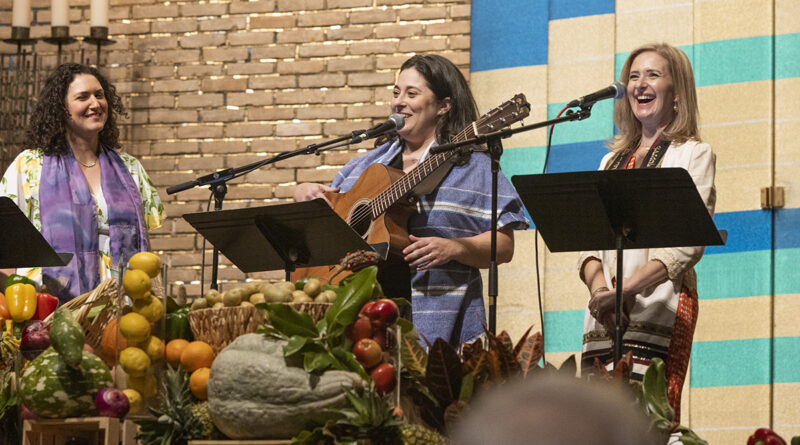 Vicky Glikin, who joined Temple Emanu-El in 2016, remains connected to her homeland Ukraine, where she lived until she was 13.

So shortly after Russia invaded the country in February, the Preston Hollow synagogue’s senior cantor traveled in April 2022 to Warsaw, Poland. There, she helped lead Seder and used her Ukrainian, Russian, and English language skills to welcome and support Ukrainian refugees arriving at the train station.

She’s continued to support relief efforts there since returning to Dallas, earning our admiration and making her Preston Hollow People’s choice for the newspaper’s 2022 Person of the Year.

“I’ve stayed in touch with the volunteers whom I met when I was there, and since I’ve come back, I’ve been … sending money over to the volunteers whom I had met and supporting their work,” Glikin said. “I’ve (also) been speaking and continuing to raise awareness … I’ve tried to keep up with some of the families I met when I was there and try to help them from afar in ways that I can.”

She also marshaled area residents to donate items for a Ukrainian couple who’d arrived in Dallas and were setting up an apartment.

Nastya Sokyrina, who’s based in the Czech Republic but has known Glikin since they were children in Ukraine, volunteered with her friend in Poland.

“We met people on the railway station from the train which came every day with Ukrainian people, and we tried to give them all (the information) they need,” Sokyrina said. “Vicky one night … helped one family to stay in (a) hotel for one night because it was a family — mother, father and three kids — and they did not sleep (in) two days.”

“People need some love, some hugs,” she added.

Sokyrina had high praise for her friend.

“She’s perfect,” she said of Glikin. “Everything that she has now, she did it … herself.”

Glikin’s trip was made possible in part by Temple Emanu-El’s disaster relief fund.

“We really felt that she was (in Poland) not only out of her own heartfelt commitment … but was really there sort of as the embodiment of our hearts, which were aching and breaking here,” said David Stern, senior rabbi of Temple Emanu-El. “She’s a remarkable leader — a remarkable leader of prayer, a fantastic teacher, a beautiful pastoral presence in both times of joy and sorrow.”

“Social justice has been at the core of who we are. When (Glikin) came to us, she already had that sense of focus herself, and so that’s manifest in her work with Ukraine, but it’s also sort of manifest in everything she does,” he continued.

Glikin has maintained strong ties to Ukraine, but she’s also put down roots in her new home of Dallas. She became involved in her children’s schools, promoting inclusion and respect, and supports other organizations she’s passionate about, including North Texas Food Bank, the Anti-Defamation League, and the U.S. Holocaust Museum.