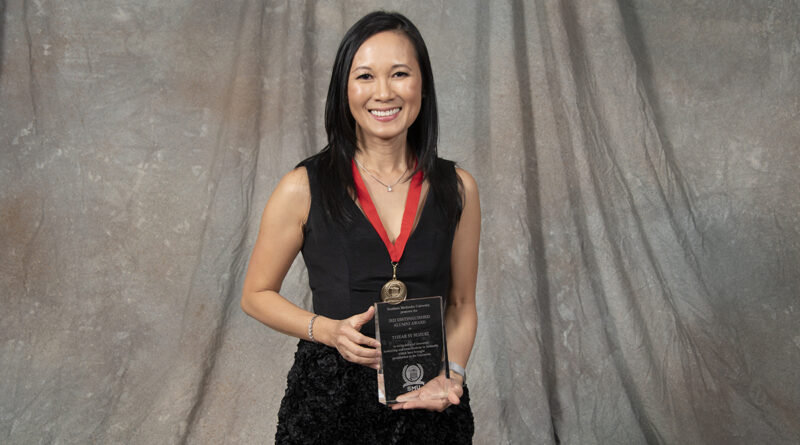 Thear Suzuki, a 2022 SMU Distinguished Alumnae, has been “creating spaces for inclusion and innovation” since her time at the university in the 1990s.

Suzuki’s family survived the Cambodian genocide and lived in refugee camps in Thailand for two years before a Catholic charity in Dallas sponsored their move to the city in 1981.

“This was a country I knew nothing about,” she said. “I didn’t know anybody, (and) I also didn’t speak the language, so it was definitely a scary time, but what I realized later was that myself and my family received a lot of support from kind strangers as well as nonprofit organizations.”

That realization has created in Suzuki an ethic of service, earning our admiration and making her Park Cities People’s choice for the newspaper’s 2022 Person of the Year.

“I realized how much I benefited from the kindness of the community, and I want to be able to give back and pay it forward any way that I can because I know that none of us make it alone,” Suzuki said.

Her third-grade teacher when she arrived in the U.S., John Gallagher, happened to be an SMU alumnus and served as an early mentor.

Gallagher helped teach her English and wrote a letter to the university’s president nominating Suzuki for a scholarship at SMU.

“SMU gave me the opportunity to learn how to be a leader,” Suzuki said.

While at SMU in the ‘90s, she was involved with various organizations, including the East Asian Students Association, the Student Council, and the Inter-Community Experience program.

Arlene Manthey served as student activities director at the time.

Suzuki “knew part of her vision and goals was, ‘I’m going to make a difference because some people have helped me get here,’ and she’s just continued to do that,” Manthey said.

Suzuki continues supporting SMU as a parent and donor on the Lyle School of Engineering Executive Board and the Tate Lecture Series Board.

Through the Inter-Community Experience program, she met fellow student Brent Renaud, who went on to become an award-winning filmmaker.

After Renaud was killed working in Ukraine earlier this year, Suzuki helped with the Brent Renaud Foundation, which aims to provide scholarships for aspiring journalists. She serves on its board.

“Thear has been a champion of diversity, equity and inclusion in the workplace for as long as I’ve known her. Her efforts and advocacy have changed the career trajectories for so many,” said Milene Cavalho, partner at EY who’s worked with Thear in Dallas for more than a decade. “She leads with conviction, connecting ideas and bringing diverse voices to the table. Thear is a genuine leader, challenging the status quo and making our world a better place. Her passion for community engagement is contagious, and her ripple effect is immense.”

She’s also inspired others on the job.

“In the six years I have known Thear, she has been fundamental in completely reframing how I approach my career, my life and my community. She’s instilled in me the value of purpose and challenges me to push myself to be more. At EY, she creates a positive environment that values diverse perspectives and collaboration,” said Marissa Ivo, an assistant director at EY based in Dallas who’s known Thear for six years.

Recently, Marc Andersen, a D.C.-based senior partner at EY, and his network of lawyers, military veterans, intelligence professionals, and nonprofits helped smuggle prominent women’s rights lawyer Latifa Sharifi out of Afghanistan after the country fell to the Taliban.

Sharifi remains in contact with EY, the Texas Bar Association, and others in hopes of finding work and continuing to help women in her native Afghanistan.

Suzuki’s been part of the effort to help her resettle in Texas.

“We need more women leaders like Thear,” Sharifi’s brother-in-law Sharif Gias said. “She always makes you feel like she’s there for you.”