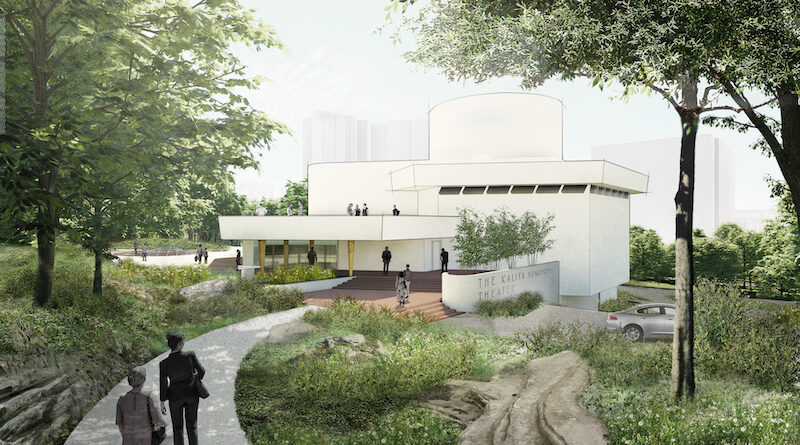 The Dallas Theater Center on Dec. 7 debuted a new master plan for the restoration of the Kalita Humphreys Theater, Frank Lloyd Wright’s only theater design built.

The plan – to be delivered by the end of 2022 –  for the theater between Turtle Creek and the Katy Trail was developed by a team of consultants led by design studio Diller Scofidio + Renfro and seeks to restore it to be similar to its look in 1959. The city council tasked Dallas Theater Center with developing a master plan in 2019, and by 2020, had selected Diller Scofidio + Renfro to head up the project.

“We put together a steering committee of folks from specialists from all different areas throughout the city who came together and helped us select an architect firm that could envision how we could restore the Kalita and fully activate the site, increase green space, provide new theatrical opportunities, provide amenities for folks throughout the whole entire city, connect the Katy Trail and the creek…and open up and activate the campus,” said Kevin Moriarty, executive director of the Dallas Theater Center.

Charles Renfro of DS + R outlined the specifics of their plan for the site during a Dec. 7 meeting.

“The first thing we want to do is restore the Kalita Humphreys to its 1959 condition,” Renfro said.

Changes would also be made to the theater to be closer to Wright’s vision by returning the stage to its original height and repositioning the seating, dropping the first few rows of seats by a couple of inches to enhance sight lines.

In addition to restoring the theater, the plan calls for adding four new buildings to Dean Park, a new proscenium theater with seating for about 200, a “black box” theater with seating for 100, a multipurpose building, and a five-story tower. These facilities would sit on what is now largely surface parking. Two underground parking garages would be added as well to accommodate the cars.

The plan would also achieve the longstanding goal of linking the Kalita and Dean Park to the Katy Trail.

‘At the Katy Trail level, a new series of green terraces and landscaped access points would connect all buildings to the Katy Trail,” Renfro said. “The effect, in the end, is that we’ve taken a site which used to hae 6.25 acres of open space and actually delivered 8.25 acres of open space that is landscaped and for the first time treated like a park.”

The lobby would also be reconfigured as part of the plan, routing attendees to the lower level of the Kalita and connecting to an underground parking garage and the adjacent black box theater.

“The main entrance to Kalita Humphreys remains,” Renfro added. “The lobby has an uncanny connection to the outside, will restore the bluff of limestone that had originally been with Frank Lloyd Wright’s original Kalita Humphreys design…and open the lobby on its east side to that limestone bluff, and also there’d be connections down to Turtle Creek through the new additional door.”

Dallas Theater Center will submit the full 400-page master plan to the city’s Office of Arts and Culture by the end of December, and will formally present the plan to and receive votes from the Park Board, Office of Arts & Culture, Arts & Culture Advisory Commission, Quality of LIfe Committee, and Dallas City Council.