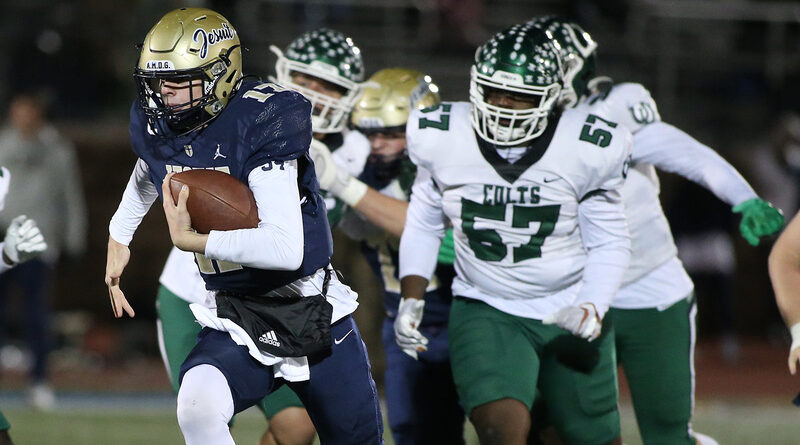 A year ago, Jesuit Dallas got its playoff revenge on Arlington. On Friday, the Rangers doubled down.

After being upset in 2020, Jesuit earned its second straight bi-district playoff win over the Colts, rallying for a 41-14 victory in a Class 6A Division II Region II matchup at Ranger Stadium.

Senior quarterback Charlie Schmidt led the way with 153 rushing yards and four touchdowns. He also threw for 163 yards and a score.

With their fifth straight victory, the Rangers (9-2) advance to face McKinney in the area round on Nov. 18 in Prosper. The Lions eliminated Coppell in the first round.

Jesuit trailed 14-3 before rolling off 38 unanswered points. Schmidt’s 54-yard touchdown scamper opened the second quarter, and he added another score moments later to give the Rangers the lead for good.

Meanwhile, the Jesuit defense shut out the Arlington offense for the last three quarters, including a goal-line stand and a Roark Holman interception on back-to-back possessions in the second half.

In 5A Division I, W.T. White was overmatched by unbeaten Frisco Reedy in a 50-14 bi-district loss on Thursday in Frisco. The Longhorns (5-6) trailed 36-0 at halftime before reaching the end zone on a Keon Rushing run and a Jaydyn Sisk pass to Jimmy Trilla.

Still, WTW qualified for postseason play in three consecutive seasons for the first time since 1980. The Longhorns haven’t won a playoff game since 2000.

In other first-round playoff action, Covenant’s season ended with a 34-24 loss to Arlington Grace Prep in TAPPS Division III.