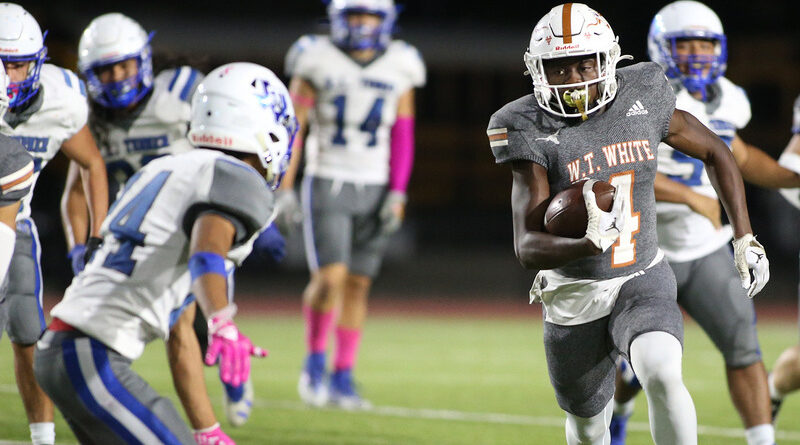 Once the points started coming for W.T. White on Thursday, they came in bunches.

The Longhorns scored 39 points in the final 13 minutes of the first half and cruised to a 53-6 win over Carrollton R.L. Turner at Loos Stadium.

The victory keeps WTW firmly in the playoff mix in District 5-5A Div. I. The Longhorns (4-4, 4-2) are in sole possession of fourth place with two games remaining. They will look to clinch a postseason berth next week at Carrollton Newman Smith.

WTW, which is averaging 53.8 points over its last five games, flashed plenty of explosiveness after trailing 6-0 early against the Lions (3-6, 2-5).

Beginning with a 58-yard touchdown run by Justin Joof at the end of the first quarter, the Longhorns reached the end zone four times in a span of five plays — the other touchdowns coming on two runs by Jaydyn Sisk and a 52-yard pass from Sisk to Jimmy Trilla.

The WTW defense recovered two fumbles, including one returned by Leader Bennette for a score. J’Coi Ware added a blocked punt return for a touchdown in the final minute of the first half to stretch the margin to 39-6.

Sisk surpassed 1,500 passing yards on the season with 19 touchdowns and is also WTW’s leading rusher with six scores. His top two receiving targets are transfers — Trilla from Highland Park and Troupe from Denton.