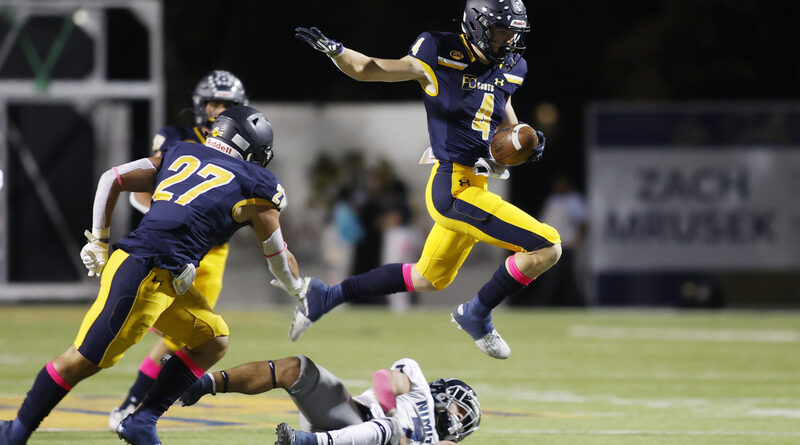 If it seemed like the Highland Park defense was always on the field, it was primarily because the HP offense was scoring so quickly.

That’s a good problem to have, and the Scots found plenty of solutions while crushing Irving Nimitz 51-6 on Friday at Highlander Stadium to keep their perfect record intact.

“We’re scoring in 2-3 plays and our defense was back on the field,” said HP head coach Randy Allen. “They were running the clock and making first downs. The past few games, that’s been everybody’s game plan against us.”

HP’s Beau Lilly reached the end zone three times, including twice on kick returns. He caught a 41-yard touchdown pass from Brennan Storer in the first half before adding two scores in quick succession in a bizarre sequence to open the third quarter.

The Scots tallied 16 points in a 32-second span, starting when Lilly returned the second-half kickoff for a touchdown. HP recorded a safety on the ensuing kickoff, then Lilly scored again on the free-kick return that followed.

Jay Cox rumbled for the first two HP touchdowns on a 2-yard run and a 43-yard punt return. Wilson Axley and Frank Mousa each added rushing scores as the Scots decimated an overmatched Nimitz defense.

“We made some great plays,” Allen said. “I’m really proud of our team. We keep improving each week.”

The Vikings (1-7, 1-5) dominated time of possession but struggled with turnovers and penalties. Their opening drive consumed 15 plays and more than nine minutes before HP’s Carl Williams intercepted a pass near the goal line. The Scots subsequently marched 99 yards in just eight plays over about two minutes.

That pattern repeated itself later, when HP’s Spencer Brown recovered a fumble near midfield early in the second quarter, and the Scots scored on the Storer-to-Lilly connection on the next snap.

The teams traded interceptions in the second half, with Nimitz’s Sakeivon Gordwin being matched by HP’s Brady Dauterive.

Pedro Maldonado threw for 171 yards and ran for 85 yards plus a touchdown to lead Nimitz. Omari Griffin added 93 all-purpose yards.

The Scots have already clinched a playoff spot and can inch closer to securing a district title next week at Irving MacArthur.