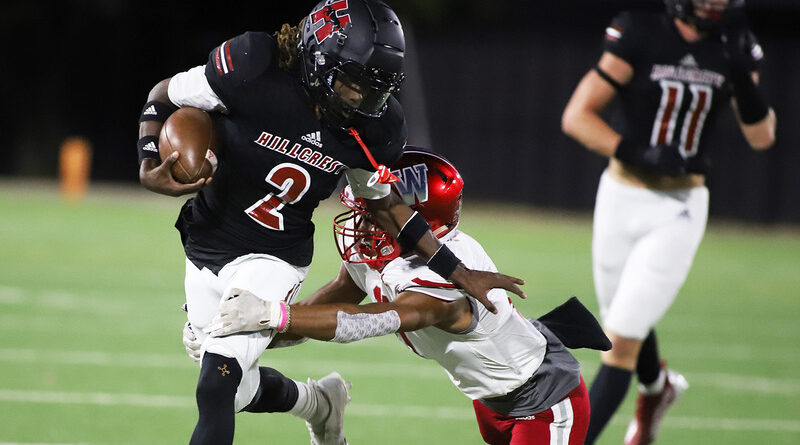 Hillcrest’s comeback came up short on Thursday, and its playoff hopes are likely destined for the same fate.

The Panthers rallied from a 17-point deficit to tie the game before falling 24-20 to Woodrow Wilson at Franklin Stadium in a game with significant postseason implications in District 6-5A, Div. II.

Woodrow (4-4, 4-0) clinched a playoff spot with its fourth straight win. However, the Panthers (4-3, 1-2) suffered their second consecutive close loss — including a 34-28 setback at Seagoville on Sept. 30 — which puts them in a tough spot in the 10-team district that is split into two divisions.

Hillcrest has just one game left in divisional play, which will determine the league’s four playoff teams prior to two crossover games to finish the regular season. Basically, the Panthers need to beat Conrad next week while hoping Seagoville falls to winless Thomas Jefferson.

“We have to get some help. That’s going to be pretty tough,” said Hillcrest head coach Jacob Ramon. “We put ourselves in a bad situation because of the two losses we just had. Both games we had a chance to win. We’ve backed ourselves into a corner.”

The Wildcats scored on their first two plays from scrimmage, including a 76-yard pass from McGuire to Keitron Pearson. Moments later, a long interception return by Reece McMillan — the first of three first-half takeaways by the Woodrow defense — set up a short scoring pass from McGuire to Black.

Hillcrest (4-3, 1-2) set aside its early miscues and eventually tied the game on a 1-yard touchdown run by Reggie Williams late in the third quarter. Williams intercepted a pass in the end zone on the next Woodrow Wilson drive, but Hillcrest didn’t capitalize.

That led to another quick touchdown strike, covering 48 yards from McGuire to Deldrick Smith, that proved to be the game-winner.

Jaden Hodge rushed for 144 yards on 28 carries for Hillcrest, surpassing the 1,000-yard plateau for the season. He also returned a kickoff for a score to open the third quarter.

“We fought back and I’m proud of that,” Ramon said. “We will learn a lot from this, and we’ve still got three games left. I know we’re going to respond in a positive way.”