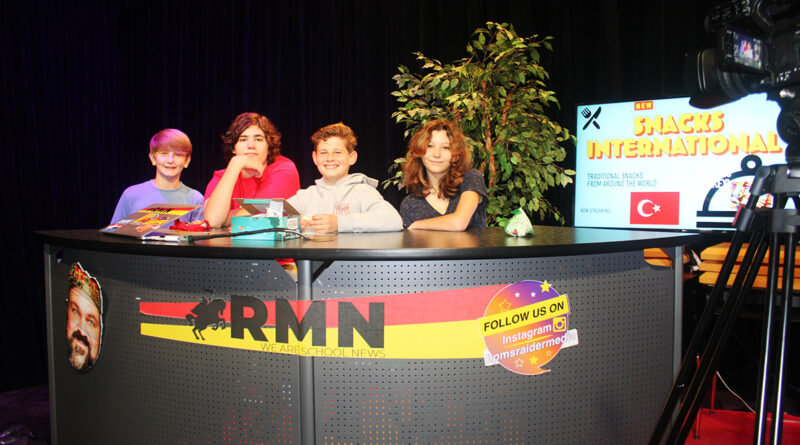 The eighth-grade broadcast journalism students produce the 20-minute news shows to be broadcast at 11:25 each Friday morning. The 2022-2023 school year marks the second year the students have the potential to earn high school credit from the class as well.

“We noticed that there was a desire for the students to create a film class or something to do with this kind of media, video media,” James Jenkins said.

He teaches broadcasting and intro to digital media at the middle school and helped start the broadcast with former HPMS teacher Aaron Cappotelli. “It really started off as a film class, but eventually, we were like, ‘Let’s make a broadcast.’”

“She said, ‘You know what, we’re building a whole new wing; let’s go ahead and build a structure that you guys can use for what you want to do,’” he said. “We’re trying our best to keep on the line of it being entertaining – entertaining, but also informative about what’s going on around them.”

The process for creating each show starts at the beginning of the week with a pitch meeting where students brainstorm ideas for the broadcast.

Student James Broer sees that collaboration as “one of the most fun parts – everyone pitches in their ideas for the segments.”

From there, Broer said that students get to filming, going out to do interviews, and editing. “I think one of the reasons I like it so much is just because it’s kind of like a work environment.”

Broer added he’d like to work in radio eventually.

Regardless of students’ future career plans, they learn to work under deadline pressure.

“Every week, no matter what, it has to be out on Fridays,” said student Aydin Ozkaya, who hopes to become an entrepreneur. “I really enjoy being there, and being part of the segment, and editing it.”

Favorite segments include the “choose that pixel” game, where people guess who’s in a photo based on a small portion of the image. They also do interviews with district and community leaders.

One such segment is Raider Career Review, in which students interview everyone from district staff (like Superintendent Tom Trigg) to sports figures (including TCU coach and former SMU coach Sonny Dykes in the past) about their jobs.