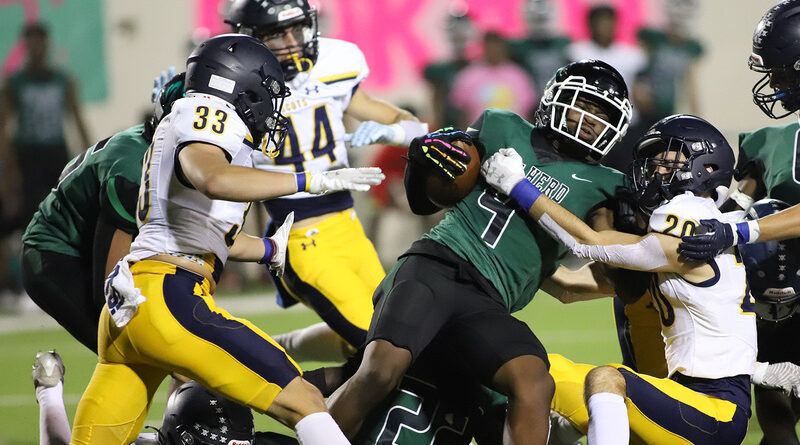 Highland Park might have liked for its defense to spend more time on the sidelines. But when its quick-strike offense is firing on all cylinders, the Scots can’t complain.

HP unleashed a flurry of big plays during a 38-17 victory over Richardson Berkner on Thursday at Wildcat-Ram Stadium.

Brennan Storer threw four touchdown passes to lead an efficient and balanced offense for the undefeated Scots (6-0, 4-0), who rolled to an early 17-0 advantage and were never seriously threatened.

Storer’s scoring passes went to four different receivers, including a 61-yarder to Grayson Schrank on the first play from scrimmage. Storer averaged more than 20 yards per completion.

Storer shook off four first-half sacks by the Berkner defense to finish 11-of-16 passing for 238 yards, putting him over 1,500 yards through six games. He has 19 touchdowns and just one interception this year.

“Our passing game has been clicking all year,” said HP head coach Randy Allen. “Brennan has been making good decisions and accurate throws. Our receivers are dynamic when they catch the ball.”

HP’s second possession culminated in a 21-yard scoring strike from Storer to Herring, who leaped over a defender at the goal line and just snuck inside the pylon. Herring leads HP with six touchdown receptions this season.

In the second quarter, the Scots marched 86 yards in perhaps their best drive of the game, which included a conversion on third-and-long deep in HP territory on a pass from Storer to Beau Lilly. Cox reached the end zone with 25 seconds remaining before halftime.

After having two touchdowns called back by penalties in the first half, the Rams (3-4, 3-2) broke through in the third quarter on a short scoring plunge by Jamary Williams, who finished with a game-high 102 rushing yards.

It was the first of two time-consuming touchdown drives after halftime by Berkner. The second covered 94 yards in 20 plays, including three conversions on fourth down, and took more than seven minutes off the clock before Kaden Alcorn’s short touchdown plunge.

“Berkner is physical. They can run the ball really well, and we needed work on that. So they gave us a lot of work,” Allen said. “We’ll get better. Our guys just need to see it enough to where they can defeat blocks and stop those good running backs.”

The Rams controlled time of possession with their run-based attack but committed 14 penalties and surrendered field position with miscues in the punting game. Freshman receiver Dameon Crowe was a bright spot with 102 yards.

Meanwhile, HP kept any potential comeback at bay with two scores in the second half, highlighted by a 30-yard touchdown pass from Storer to Heis.

The Scots, who are in sole possession of first place in District 7-6A, are averaging 42.8 points per game so far this season. They will return home on Oct. 14 to face Irving Nimitz.