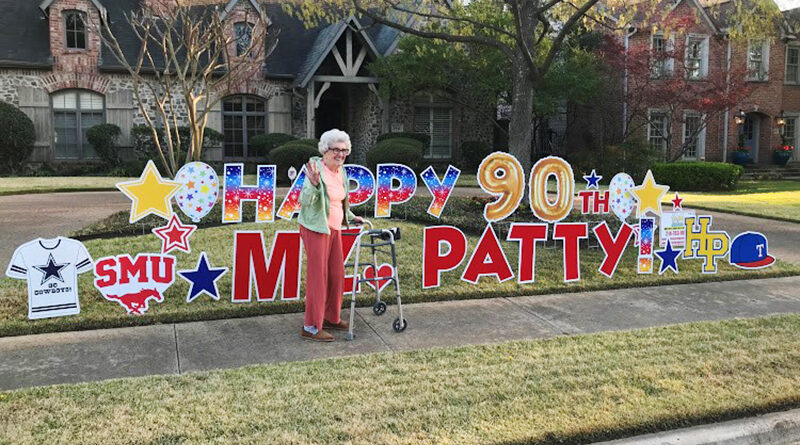 Patty Kendrick loves SMU, the Park Cities, and “looking for the best in anything or anybody.” She drew a large crowd in April as neighbors surprised her with a birthday celebration. PHOTOS: Courtesy Highland Park High School
Community Park Cities Trending
October 3, 2022October 11, 2022 Josh Hickman 0 Comments Patty Kendrick

Patty Kendrick enjoys talking about the commotion she noticed outside her University Park home on April 2.

“They had arranged a display that read, ‘Happy 90th Mz. Patty,’” she explained. “Before I knew it, I had a whole party in my front yard!”

Honoring her Park Cities roots, the bagpipers and Lads & Lassies performed, and August Ryan led a rendition of the Highland Park High School alma mater, with Patty singing all the words some 74 years after graduating.

The gathered students, friends, and neighbors then sang Happy Birthday, and the bagpipers played Amazing Grace, leaving not a dry eye in the crowd.

“It was wonderful,” Patty said.

Her family had moved from Houston to Potomac Avenue when she was a little girl; she remembers walking to Armstrong Elementary School.

“I loved it,” she recalled. “You were exempt from exams if you had an A average.”

After graduating in 1948, she attended SMU and pledged Tri Delta.

“I was going to save the world, so I studied sociology,” she said. “I love SMU. I still go to all the games.”

She met her husband, Bill, at SMU. They married a week after graduation, and he started his career as a mechanical engineer. Called into the Air Force, Bill moved with his young wife to Albuquerque, where he worked in special weapons. Civilian life returned two years later, with Bill working for Exxon Mobil in South Texas and Patty giving birth to two sons in King County Hospital.

After stints in several cities, the family returned to North Texas, moving to Plano in 1976.

Eventually, Patty landed back in the Park Cities in a home constructed on the plot of her parents’ old family house.

The secret to longevity and happiness?

“Having a good, stable life with a good faith stands you through a lot of bumps and grinds in life,” she said.

“I’ve gone through cancer,” Patty said. “It was scary.”

She also knows about service.

“I’ve been president of everything I’ve ever belonged to,” she said, chuckling, “and that’s good. You’ve got to get involved.”

“My life has been a gift,” she concluded while talking about what brings happiness: “a positive attitude of looking for the best in anything or anybody — things that are productive and helpful to you and make you smile.”