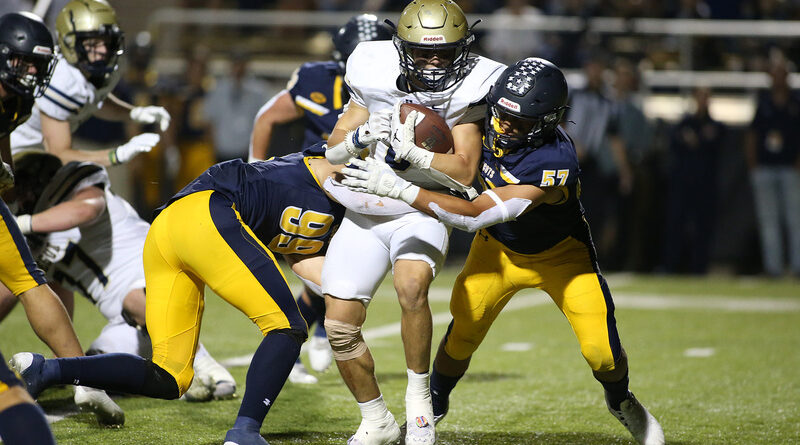 For three quarters, a highly anticipated dual between two unbeaten powers atop District 7-6A hardly looked like a fair fight.

Highland Park dominated for much of its 35-28 win on Friday at Highlander Stadium before withstanding a valiant comeback by neighborhood rival Jesuit Dallas.

The victory gives the unbeaten Scots an edge in the race for the District 7-6A title at the halfway point of the regular season. HP already has defeated Jesuit and Lake Highlands, the other two league favorites.

The Scots (5-0, 3-0) made it look easy for much of Friday’s game. Led by dual-threat quarterback Brennan Storer, the big-play HP offense found success both on the ground and in the vertical passing game.

Storer threw a pair of touchdown passes and also rushed for a season-high 141 yards and a score. Jay Cox added three touchdowns after reaching the end zone six times during HP’s previous game against Irving.

The Scots opened a 35-0 lead before Jesuit stormed back with four consecutive touchdown drives — fueled by the legs and arm of quarterback Charlie Schmidt — in the fourth quarter against a fatigued HP defense. The Rangers (4-2, 3-1) couldn’t secure a last-gasp pooch kickoff in the closing seconds.

“You have to find a way to win even when things are going against you, and our guys did that,” said HP head coach Randy Allen. “A lot of breaks went against us in the second half, but you’ve got to fight through it.”

Two lengthy drives led to early HP touchdowns, first on a short run by Cox and then a 37-yard pass from Storer to Luke Herring.

HP dealt two devastating blows late in the first half. The first came after a Jesuit punt pinned the Scots at their own 3-yard line.

The Scots needed just seven plays to march 97 yards to the goal line. The possession started with a 42-yard connection from Storer to Jackson Heis and ended with a Cox scoring plunge.

Jesuit’s best scoring chance of the first half was stopped by a Jack Morse interception at the 29-yard line with two minutes left.

That gave Storer enough time to engineer another impressive scoring drive in which he racked up 51 rushing yards. A 2-yard touchdown run gave the Scots a 28-0 halftime advantage.

“He’s a lot better runner this year,” Allen said of Storer. “He’s breaking tackles and making good decisions in the pocket for when to scramble and when to throw it. He played a great game.”

Meanwhile, the Scots held Jesuit’s high-powered offense and its dynamic playmakers in check, although the Rangers rolled up 316 total yards after the break.

“Potentially, we’ve got a chance to have a really strong defense,” Allen said. “There’s no question we can run and tackle, and we can play pass defense. We’ve just got to be strong inside against the running game and we’ll be fine.”

The Scots extended the margin in the third quarter. After a fourth-down stop by Morse inside the HP 10-yard line, Storer capped the ensuing 94-yard drive by finding Cox on a 28-yard strike. With 3:53 remaining in the third quarter, the game appeared destined for an HP blowout.

“We got in a hole early on, but we fought back. At halftime we rallied the troops,” said Jesuit head coach Brandon Hickman. “I’m not into moral victories, but I don’t know if I’ve been more proud of a team.”

Schmidt and the Rangers used their up-tempo attack to score in bunches. Schmidt’s 8-yard touchdown run on the opening play of the fourth quarter put Jesuit on the board.

Then came an onside kick recovery by Robert Prager. Capitalizing on the short field, Schmidt scored again moments later. Still, the game seemed out of reach until Jesuit cut the deficit to 35-21 on an 18-yard hookup between Schmidt and Matty Wagner with 3:53 remaining.

Taking advantage of some untimely HP penalties, Jesuit got the ball back but essentially ran out of time. In desperation mode, Schmidt’s touchdown toss to Jake Musso with 15 seconds left made it a one-score game.

“We just have to play better in the fourth quarter. Our defense got worn out. Those long drives took their toll,” Allen said. “The momentum shifted when they scored and got that onside kick, and we never got it back.”

Schmidt completed 31 of 46 passes while also logging a team-high 20 rushing attempts. He even caught a pass on a trick play. Musso finished with a game-high 114 yards on 11 receptions.

The Scots will have a short week to prepare for a game at Richardson Berkner on Oct. 6. The Rangers will enter a bye week before returning to action on Oct. 14 against Berkner.