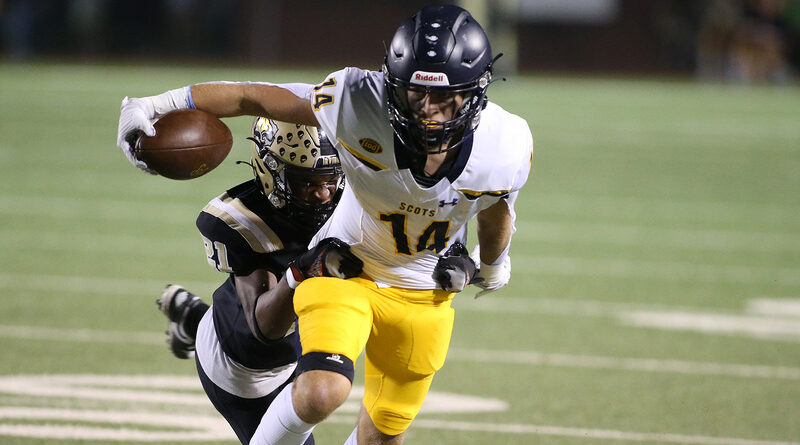 Much more than just neighborhood bragging rights will be on the line when Highland Park and Jesuit Dallas clash on Friday at Highlander Stadium.

Even though it’s only late September, the high-stakes matchup could determine the regular-season champion in District 7-6A and have significant implications on playoff seeding.

It will be the first meeting in more than two decades between the two rivals whose campuses are about seven miles apart. The Scots have won five of the six prior clashes, including most recently a 37-0 shutout during nondistrict play in 2001, prior to the Rangers joining the UIL. Jesuit’s only victory over HP came in 1973.

Friday’s test will carry added meaning as the first district game in the series. It’s still early, but HP and Jesuit are tied with Irving MacArthur atop the 7-6A standings.

Plus, as the two schools with the lowest enrollments in the nine-team league, they are almost assured of being the two representatives in the 6A Division II playoff bracket. So that’s where seeding importance factors in.

Bringing together two passionate fanbases in close proximity will only enhance the atmosphere, as recent meetings in basketball, baseball, and lacrosse have proven.

At any rate, the Scots (4-0, 2-0) and Rangers (4-1, 3-0) have each navigated difficult schedules thus far, including wins for each over fellow playoff contender Lake Highlands.

HP was won 45 consecutive district games dating back to 2014, while Jesuit has earned 15 straight district wins. The Scots also have won 19 home games in a row.

Jesuit has a three-game winning streak after a season-high offensive output during last week’s 56-7 thrashing of Irving that featured 408 rushing yards and an average output of more than 30 yards on scoring plays.

Dual-threat quarterback Charlie Schmidt has thrown for 928 yards and seven touchdowns while rushing for five scores. Jake Musso and Cameron Martin are threats both running and receiving. Grayson Wombacher and Jake Buckner lead the Jesuit defense.

Meanwhile, it’s been 15 days since the Scots throttled Irving 63-0 in their most recent game. Jay Cox led the way with six touchdowns — five rushing and one punt return. He leads HP in rushing yards and total receptions this season.

Brennan Storer surpassed the 1,000-yard passing mark for the season against the Tigers. The stellar start to his senior year includes 13 touchdown throws with just one interception, along with two rushing scores. Top targets include Jackson Heis, Grayson Schrank, and Luke Herring, who have combined for nine touchdowns.

As part of Friday’s festivities, two former HP greats — Dave Richards and Jack Collins — will be inducted into the school’s Ring of Honor during a halftime ceremony.

Richards was an all-state offensive tackle during the early 1980s who played nine seasons in the NFL. Collins was a two-way standout on HP’s state championship team in 1957 who went on to star at the University of Texas.