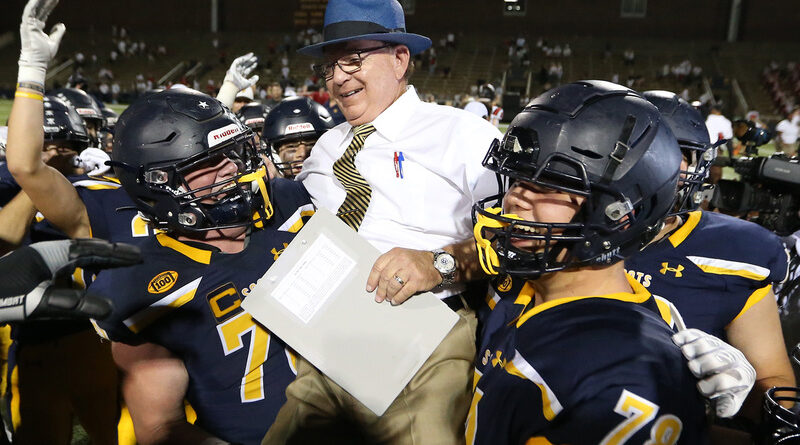 On a night when a past No. 7 was honored as one of the best players in Highland Park history, the current No. 7 might have stolen the show.

Brennan Storer threw five touchdown passes and also ran for a score as the Scots rolled past Lake Highlands 52-21 in the District 7-6A opener on Friday at Highlander Stadium.

Storer will be the last HP player to wear uniform No. 7 — for the rest of this season — after it was retired in honor of former Scots standout Matthew Stafford, the Super Bowl champion quarterback from the Los Angeles Rams who was recognized during a halftime ceremony.

Allen won’t mind being upstaged by Storer, who completed 18 of 24 passes for 315 yards and led the Scots (3-0, 1-0) on three first-quarter touchdown drives. Lake Highlands was never able to recover from the early deficit.

His scoring passes were distributed among five different receivers, including Jay Cox, who added a rushing touchdown as part of a third-quarter barrage that broke the game open.

“We threw and caught really well. Brennan had another great game,” Allen said. “Our receivers are hard to cover because they’re physical and fast. I was really proud of our execution.”

HP opened the game with four straight scoring drives of at least 56 yards. They were punctuated by a 15-yard pass to Grayson Schrank, a 15-yard toss to Cox, a 19-yard throw to Jackson Heis, and a 27-yard scamper by Storer to put the Scots up 28-14 midway through the second quarter.

The Wildcats (2-1, 0-1) stayed within striking distance thanks to Deonte Dean, who rushed for a game-high 145 yards and two touchdowns, including a 44-yarder.

However, Lake Highlands too often hurt itself with miscues, including three turnovers and some untimely penalties. Personal fouls kept alive two of the first three HP drives.

Later, an infraction for intentional grounding in the end zone gave the Scots a safety and a 30-14 halftime advantage.

“We made mistakes and things started going downhill for us,” said Lake Highlands head coach Lonnie Jordan. “This is a tough loss but we’re young. Maybe this is something we needed.”

The Wildcats fumbled the opening kickoff in the third quarter, recovered by HP’s Charlie Barton. The Scots quickly took advantage of the favorable field position when Storer connected with Luke Herring for an 18-yard score.

Also in the third, Lake Highlands missed a short field goal, threw an interception to HP’s Carl Williams, and muffed a punt that was recovered by HP’s Preston Bond at the 19-yard line.

Storer found Beau Lilly in the end zone on the ensuing snap to stretch the margin to 52-14, ending the evening for the first-team offensive unit.

“Our defense came through with some big plays and some big turnovers to give us good field position,” Allen said. “Lake Highlands has some explosive players and a really good offensive line.”

HP committed its first turnover of the season on an interception by Lake Highlands safety Carson Klein near the goal line late in the first half, but it was inconsequential.

Allen’s record is 427-92-6 wins in 42 seasons as a head coach — including the last 24 at HP — while Moore accumulated 426 victories over 44 years at Pilot Point, Celina, Sherman, and Aubrey. Allen’s career includes prior stints at Ballinger, Brownwood, and Abilene Cooper.

“He’s a great guy and I’m just honored to be in that same category,” Allen said. “It’s a result of all of the good coaches and players I’ve had.”

Allen already is the active leader in coaching wins after the retirement of Corpus Christi Calallen’s Phil Danaher last year. However, he still needs several more years to approach the Danaher’s 490 victory total.