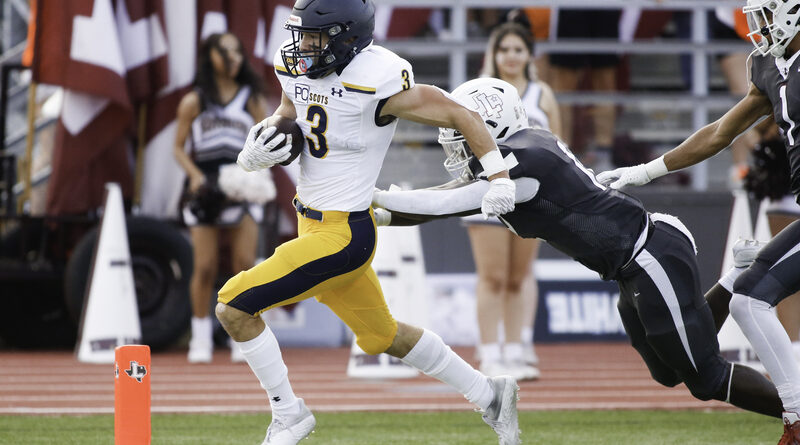 LEWISVILLE — Highland Park showcased big-play capability on both sides of scrimmage during its first road game of the season on Friday.

The Scots surged past Lewisville 31-17 at Goldsmith Stadium to remain unbeaten heading into next week’s District 7-6A opener against Lake Highlands.

Brennan Storer passed for 299 yards and four touchdowns — three of which covered at least 45 yards. While the aerial firepower established a slim advantage for the Scots, two late fourth-down defensive stops inside the HP 10-yard line sealed the victory.

HP head coach Randy Allen earned his 426th career victory on the sidelines, tying him with G.A. Moore for second all-time among Texas high school coaches. Allen’s total covers 42 seasons, the last 23 of which have been at HP.

“What matters is what we do next week,” Allen said of the first district clash. “I’m happy that we’re playing with confidence and getting a little better each week.”

The biggest of Storer’s scoring passes on Friday might have come midway through the third quarter, when he connected with Luke Herring for a 45-yard touchdown on third-and-25, which proved to be the game-winner.

Grayson Schrank tallied a pair of touchdown receptions, including a 69-yarder also on third-and-long in the second quarter.

“We’re making some big plays in the passing game,” Allen said. “We’ve got receivers who can get deep, and [Storer] is finding them. They’ve got good chemistry together.”

HP never trailed, although the Farmers rallied three times to tie the game. The Scots opened the scoring with a 56-yard connection between Storer and Jackson Heis on the fourth play from scrimmage.

HP’s Adam Rourke blocked a punt later in the first quarter, although the Scots had to settle for a field goal after a penalty.

With the score tied at 10, Storer found Schrank streaking down the left sideline for the longest score of the game, enabling HP to regain the lead and the momentum.

Lewisville remained within striking distance with long and deliberate offensive drives meant to capitalize on its size advantage in the trenches. But the Farmers unleashed a big play of their own to start the second half, as Viron Ellison dashed 57 yards for a touchdown to forge a 17-17 tie.

However, the Farmers never scored again despite holding advantages in total yardage and time of possession down the stretch.

After Herring’s touchdown, Lewisville threatened to knot the game again before the HP defense stuffed a quarterback sneak on fourth down at the 8-yard line early in the fourth quarter.

“It was a play here and a play there. The two fourth-down stops were huge,” said Lewisville head coach Michael Odle. “We just didn’t play well enough to win, and that’s a good team.”

The Scots (2-0) responded with a 92-yard drive, keyed by a 34-yard catch by Herring and culminating with a 12-yard strike to Schrank in the end zone. That gave HP a two-score cushion for the first time.

The Farmers (1-1) penetrated inside the red zone again on their next drive but came away empty after HP stifled another fourth-down running play.

“Our defense gave up some yards, but when it really counted, they came up with huge stops,” Allen said. “If they knock those two scores in, it’s a different ball game.”

Ellison rushed for a game-high 123 yards, which was almost three times as much as HP’s collective ground game. Terrell was 20-of-34 passing for 182 yards, hooking up with nine different receivers.

Storer, who completed 16 of 27 throws, also distributed the ball evenly between his top targets. Schrank and Herring finished with 93 yards apiece, while Heis added 85.

The Scots’ margin of victory was identical to their season-opening triumph against Lewisville’s neighborhood rival, Flower Mound Marcus.