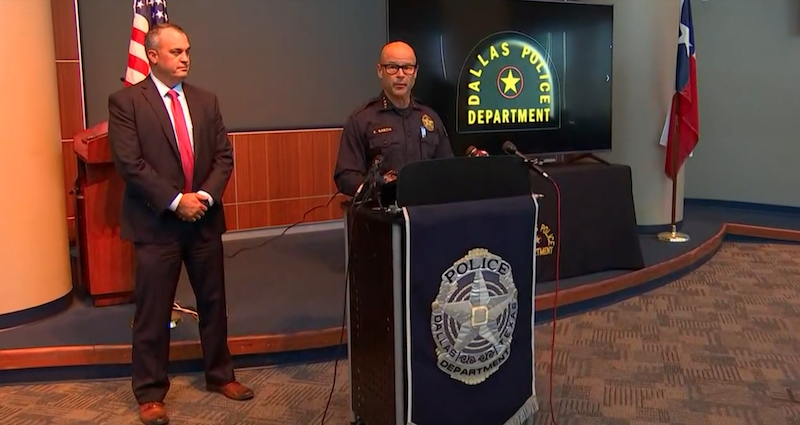 The woman accused of firing inside a terminal at Dallas Love Field airport Monday faces a charge of aggravated assault against a public servant, jail records show.

Dallas Police Chief Eddie Garcia said Portia Odufuwa, 37, was dropped off at the airport by an Uber driver just before 11 a.m., went into a restroom, and left about five minutes later wearing a hoodie.

Garcia said she walked to the Southwest Airlines ticket area, said she had an announcement to make, began talking about her marriage, and threatened to blow up the airport before she pointed a handgun and fired multiple rounds toward the ceiling.

An officer in the area gave commands for Odufuwa to drop her weapon, Garcia said, and surveillance footage showed she pointed her gun at the officer.

The officer, having taken cover behind a kiosk, fired at Odufuwa multiple times, hitting her in the lower part of her body, police said. No one else was injured.

Authorities say Odufuwa was taken into custody and then to a hospital, where she underwent surgery and was said to be in stable condition. There was no jail location or bond listed for Odufuwa as of Tuesday

Court records show Odufuwa previously faced charges including robbery, arson, false reporting, and criminal trespass. The outcomes of some of those cases were unclear as of Monday, but several were dismissed.

She’d previously told police in Mesquite investigating a fire in 2019 she was “God’s prophet” and that her husband was rapper Chris Brown, court records show.

Garcia said Odufuwa was prohibited from possessing a firearm since August 2018 based on her history and police are working with the FBI and ATF to investigate the origin of the firearm.

He said her actions prior to the shooting at Love Field and her motivation are still under investigation and she could face additional charges.

Police are also asking for anyone with video of the incident at Love Field to share it with them here.