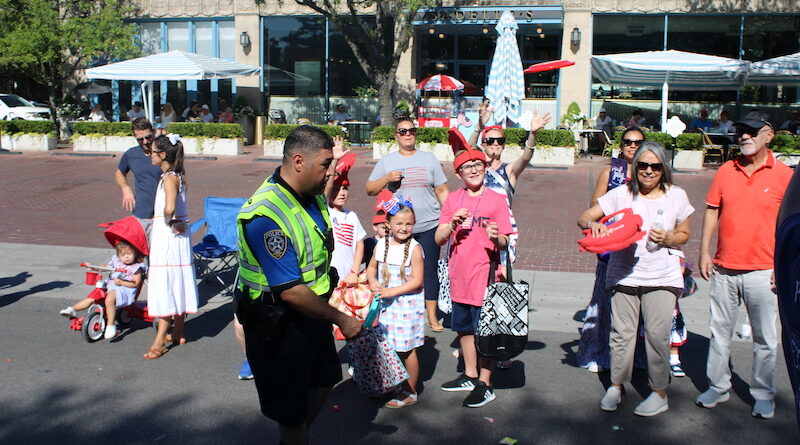 Sarah Oliai, who led the Rotary Club of Park Cities parade committee, was helping with festivities in Goar Park on July 4 when she got a notification on her phone about the deadly shooting at an Independence Day parade in Highland Park, Illinois.

Like many attending festivities that day, Oliai was shocked by the news. A native of northern Illinois, she was familiar with the Highland Park area.

“I think everybody who attended a parade that day thought about it,” Oliai said. “Particularly (in Highland Park, Texas), the names are very similar. Same name, different state.”

Some readers also reached out to People Newspapers after the event with concerns about military-style vehicles in the parade given the recent shootings in Highland Park, Illinois, and Uvalde, Texas, and Oliai said those concerns will be taken into consideration during planning for next year’s Park Cities parade.

“There’s always military vehicles in the parade. There’s a special street they line up on and we have a lot of veterans in our community who enjoy (seeing them),” she said. “With the news that happened later, I can certainly understand why (some of the military vehicles) would cause great concern … it’s one of the things we’re discussing in our parade wrap-up meeting.”

“Safety is always our number one concern. Historically, we’ve kind of focused on whether people stop and start, and people hop on or off, and what things are thrown, and asking people to keep their children at the curb and not let them approach (floats), but obviously, there will be other things on the list as well for next year,” Oliai added.

The Highland Park Department of Public Safety and University Park Police Department help provide security for the parade each year and HPDPS spokeswoman Lt. Jessica Russell said the news from Illinois impacted them, too.

“Obviously it’s very close to home for all of us considering everything that’s happening all over the country, and we take it very seriously, so we make sure we have lots of officers especially (for) the Fourth of July, we bring in outside agencies that help fill spots that are needed, and we work very closely with our neighboring agencies to make sure that we’re all on the same page on how we need to address (issues) beforehand and how we address something that’s currently happening,” Russell said. “We prepare ourselves with extra training together.”

“For every large event, the agencies involved meet multiple times to discuss the resources and actions that will be necessary to ensure the safety of all attendees.  UPPD and UPFD always assign an event commander who is responsible for creating an Event Plan,” UPPD Chief Bill Mathes added. “We also network with other area law enforcement agencies to share intelligence regarding any potential threats so that we may address those in advance of the event.  And we train and remind all of our personnel to be observant for anything out of the ordinary and have protocols in the Event Plan for how to address those.  We have not yet met specifically about the shooting in Highland Park but the Chiefs of the area agencies have met recently regarding these types of incidents and continue to remain in regular contact.”