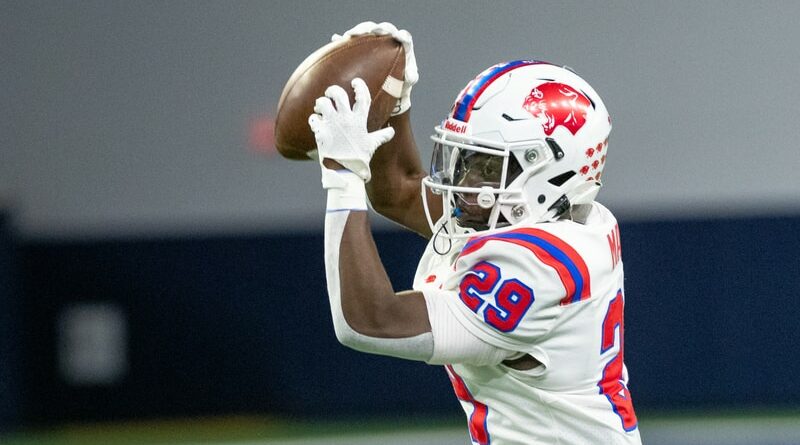 A football standout in the fall, Parish Episcopal junior Cedric Mays earned first place in the 6A triple jump at the TAPPS state track and field meet in Waco. (PHOTO: Wiley Williams)
Preston Hollow Sports
May 8, 2022May 9, 2022 Todd Jorgenson 0 Comments

Parish Episcopal’s Cedric Mays won a gold medal in the 6A boys triple jump at the TAPPS state track and field meet on Saturday in Waco. The junior took the top spot with a school-record distance of 43 feet, 4.5 inches.

Mays won the only event for the Panthers, although Ryan Forson was second in both the 100 and 200. Parish also took silver in the boys 4×200 relay.

In girls events, Ursuline’s Alyssa Jackson claimed silver in both the 100 and the 200, finishing just ahead of Parish’s Samantha Ward in both races.

In Class 4A, Covenant’s William Peters crossed the line second in the boys 3,200 and third in the 1,600, a feat mirrored by classmate Sophia Davis in the same two distance events. Andrew Morgan took bronze in the boys 400.