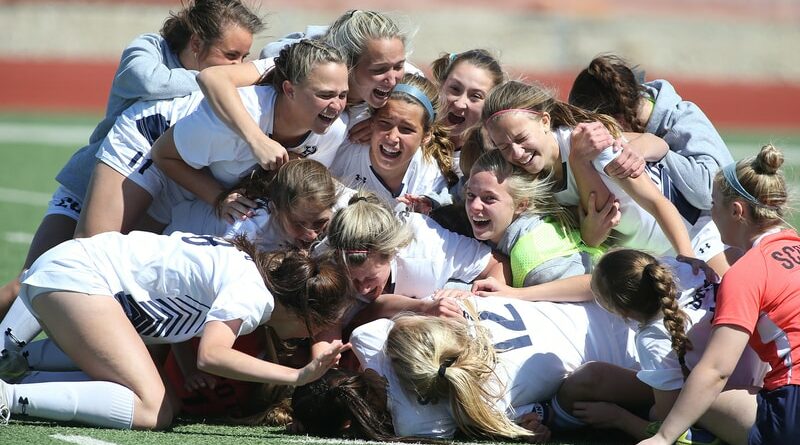 The HP girls are one win away from a 5A state tournament appearance after topping Frisco in a shootout on Friday. (PHOTO: Chris McGathey)
Park Cities Sports
April 8, 2022April 9, 2022 Contributor 0 Comments

CARROLLTON — While neither Hattie Speicher nor Chloe Sanders delivered the decisive shootout kick, the Highland Park girls soccer season would have been over without them.

Speicher and Sanders each found the right side of the net with essential spot kicks to extend the shootout that the Lady Scots eventually won 7-6 over Frisco on a conversion by Parker Buckroyd.

HP was able to advance in a Class 5A Region II semifinal that ended in a 2-2 deadlock after regulation and overtime on Friday at Standridge Stadium.

“I’m so proud of the way the girls stepped up,” said HP head coach Aaron McGough after her team converted 7-of-8 attempts. “It is not an easy place, especially in this wind. A shootout is an exciting way to win but a horrible way to lose. Frisco is a really talented team and it is a shame we had to play each other so soon.”

With this kind of match in mind, the Lady Scots close each workout with shootout practice.

“Everybody works on it,’’ said McGough. “They were prepared and they took care of business.’’

The Lady Scots (23-0-3) will face Frisco Wakeland at 10 a.m. Saturday in the Region II title game, needing a victory to reach the state tournament for the 14th time.

The Raccoons (19-1-5), who were playing in a regional tournament for the first time since 2016, fell behind early in the shootout then rallied for leads of 5-4 and 6-5 but each time HP converted to force another round.

“It is very nerve-wracking,’’ said Elise Borders, the third HP shooter, “but we work on it a lot and I always feel confident.’’

Borders, a Dallas Baptist signee, scored twice from distance in the first half to give Highland Park a 2-1 halftime lead.

The senior midfielder’s first goal in the eighth minute pulled the Lady Scots level when it trickled out of the keeper’s hands just beyond the goal line. Midway through the half, Borders’ 45-yard free kick from the left sideline found the net.

Frisco opened the scoring in the third minute on a curling shot inside the far post by Alex Terrell. Time ran out in the half before Frisco could attempt a free kick just outside the penalty area.

A curling corner kick by Luci Rodriguez eight minutes into the second half tied the score. Frisco had an advantage in scoring chances for the remainder of regulation and overtime.

Other Lady Scots converting in the shootout were Kylie Bell, Ella Weathersby, and Hattie Patterson. HP goalkeeper Claire Binns made an easy save on a shot by the eighth Frisco shooter.