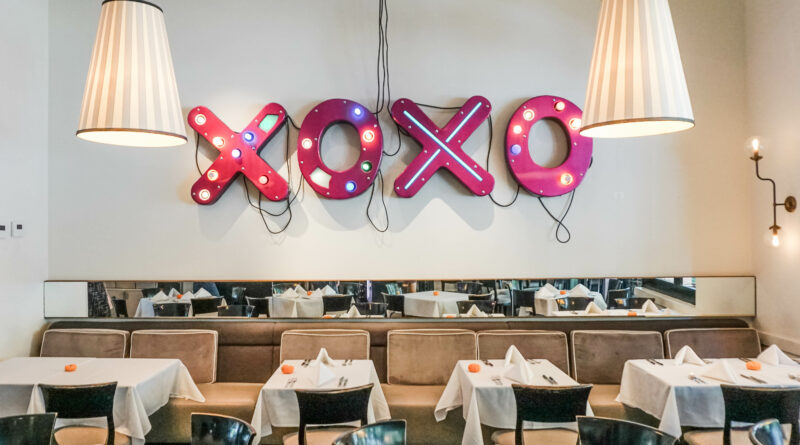 Food and romance are inextricably linked.  Unless you get food poisoning, that is, then romance is dead.

Restaurants are the setting for so many first looks, first dates, so many romantic gestures and proposals. In fact, quite a few romances in Preston Hollow and the Park Cities have bloomed at local restaurants, some that are still popular and some that are long gone. In honor of Valentine’s Day, we thought we’d share some of our reader’s romantic restaurant stories.

Robin and Norm Bagwell met at Café Pacific in 1983 when the two former SMU students were on dates with other people. A group went to a pre-dance dinner and were seated next to each other, Norm on one side and Robin’s then-boyfriend on the other. The two hit it off and started dating each other soon after, marrying in 1988.

Samantha and Phil Wortley met in 2008 at Mi Cocina at Highland Park Village. They, too, were among a group gathering, a mutual friend’s birthday party.  They met in the crowded vestibule’s hostess stand, sat next to each other and, even shared fajitas.  Married four years later, they still frequent Mi Cocina and “pass our table and look fondly at the exact booth where we sat the night we met,” Samantha told me.

Several first dates have taken place at Mi Cocina and scores of relationships were launched (and maybe ended) at the Monkey Bar upstairs. A few respondents said their first date was at Uncle Julio’s on Lemmon and handful of lovers admitted to meeting their significant other at the back-of-the-Chevy Happy Hour queso bar at Chuy’s. Lindsey McCain, who now oversees marketing at Mesero, had her first date with her husband at Javier’s. Mexican food seems to inspire romance, or maybe it’s the margaritas

Preston Hollow’s Neighborhood Services proved to be a good match for Beth Stavinoha who met her future husband there after meeting him on Match.  In the same shopping center, the old Border’s Books café was the meeting place for another couple whose marriage ended about the time Border’s did, unfortunately.  She didn’t want her name mentioned but she said she likes to eat at the café in Central Market where Border’s was, and she’s still single, by the way.

Donette Kean had her first date with her betrothed, University Park police officer John Trussell at the Flying Fish.  The casual neighborhood vibe of Flying Fish was the perfect setting for them to get to know each other.  After one date, Donette was hooked.

The typical romantic restaurants, The Mansion, French Room, The Grape (RIP), L’Ancestral (RIP) and St. Martin’s Wine Bar also came up in my quest to find out where love first struck. So did Burger House which I totally validate.

I met my husband at the now-closed Popolo’s in Preston Royal.  We were set up on a blind date and chose there to meet.  Months later, we declared our intentions at Chez Gerard, which is also gone now but it was lovely. When we got engaged, we celebrated at Popolo’s and we took our blended family of four kids there before it closed. It will always hold a special place for us.

One of the many reasons I write about the restaurant industry in because there is so much life that goes on in a restaurant. There are millions of interactions in restaurants across the world every day – romance happens in the front of the house, back of the house and among the guests who come for sustenance, socialization, serendipitous meetings. I think it’s all very romantic.

This a big weekend in Dallas for restaurants, thanks to Valentine’s Day and Matthew Stafford’s debut in the Super Bowl. I hope you made your reservations or planned that special dinner at home for your loved ones. Wherever you celebrate, Happy Valentine’s Day.