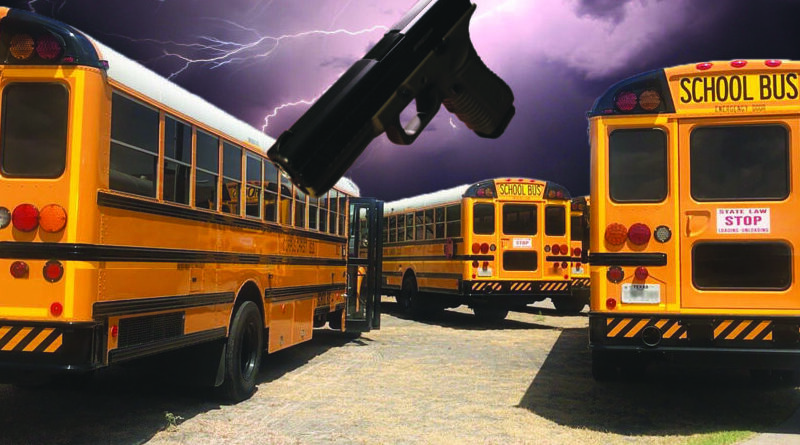 The first week in December, I picked up my fifth-grade son from school — a pretty normal occurrence. But as I pulled away from the curb, he said something that gave me pause.

“Mom, there’s a note in my take-home folder about the gun at school,” he said.

“Maybe he’s talking about a lockdown drill they’re having,” I thought.

When we got home, I took out his folder and found the note. It explained that a student at Marsh Preparatory Academy had brought a gun to campus, and because the student rode a bus that picks up both nearby elementary school students and middle school students, there was a brief time that the student was on my son’s campus.

The note sought to reassure parents that “there was never any active threat.”

But as I sat there looking over the letter, I realized that my son had sat down on the couch, and was watching me. The anxiety was almost visibly rolling off of him in waves. He had read the letter at school at some point, before I had the chance to, he told me later.

I asked him how he was feeling. Tears appeared in his eyes. He stared at the floor.

“What am I supposed to do if someone is shooting in my school?” he asked.

“Listen to your teachers and the other staff – very carefully,” I said past the lump in my throat. “Do everything they say, right away.”

“I think I might pray, too, in my head,” he said, a little teary-eyed. “I will pray that we are all protected, and I’ll pray that the shooter changes his mind and stops shooting.”

“That’s a good idea, too,” I said, silently losing my ever-loving, uh, stuff.

“Ms. Taylor isn’t that big, and she hates fighting. How is she supposed to protect all of us?” he demanded.

“Sometimes it’s braver to admit you’re scared, and ask for help,” I told him.

“Can we snuggle on the couch?” he asked. “Today was very anxious for me.”

I tried to reassure him that the staff at school were trained to help keep kids safe. I was also trying to sound more convincing than I felt — teachers are paid so little, and have had to deal with so much recently, and here we are, expecting them to put their bodies between our children and a gunman, if it came to it.

I would like to think that we can all agree that a middle schooler shouldn’t have unfettered access to an unsecured firearm that he or she can bring to school. I don’t know why the answers to that issue are so polarizing.

I don’t know how to tell my child that he’ll never have to — as one class in Oxford, Michigan did just days before we got the letter from our school — barricade the doors to his classroom and then jump out a window.

I don’t know how to tell him it won’t happen, because that might be a lie.