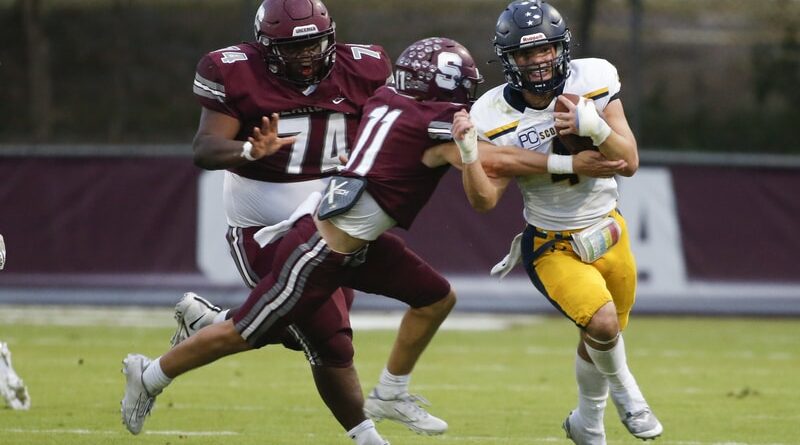 SHERMAN — Some extenuating circumstances might have contributed to Highland Park’s slow start in its District 7-5A Div. I opener on Thursday.

However, after trailing early, the Scots found their stride and pulled away for a 35-17 win over Sherman in a game moved up a day from its original schedule due to expected inclement weather.

“It was a sluggish start,” said HP head coach Randy Allen. “Combination of a lot of things — moving the game from Friday to Thursday, starting at 5:30 p.m., coming off a bye week, having a lightning delay. We were much better in the second half. It us awhile to get there.”

Christian Reeves ran for 73 yards and a pair of touchdowns on 13 carries, Jay Cox finished with six carries for 87 yards and a score, while Brennan Storer completed 13 of 18 passes for 135 yards and two touchdowns for the Scots (4-1, 1-0).

Storer connected with Jackson Heis for a 26-yard score early in the fourth quarter to make it a three-score margin. John Rutledge, who led the Scots with five receptions for 34 yards, also caught touchdown pass in the second half

HP extended its winning streak to four games heading into a showdown against Longview on Oct. 8 at Highlander Stadium.

“We recovered three onside kicks [by Sherman]. That was huge because each one could have been a turnover of possession,” Allen said. “That was a big part of it. Jay Cox had some punt returns and they flipped field position.”

Sherman quarterback Phoenix Grant had 19 carries for 65 yards and two touchdowns and also completed 20 of 31 passes. Elijah Chapman finished with four receptions for 45 yards to pace the Bearcats, who opened district play last week with a victory over Wylie East.

After leading just 14-10 at the break, the Scots started the second half with a drive capped by Rutledge’s 19-yard touchdown grab in the left side of the end zone. Storer completed all five of his passes on the drive and connected on nine of 11 throws for 93 yards after going just 4-of-8 for 42 yards before halftime.

“When Brennan’s spreading it around, it makes the defense’s job harder,” Allen said. “We like to get every receiver to get a touch.”

Sherman cut the margin to 20-17 on the ensuing possession of the second half, thanks to Grant’s 1-yard scoring plunge on fourth-and-goal.

After a penalty on the first play of HP’s next series, Cox raced 47 yards to the Sherman 10. Three plays later, he scored. A two-point conversion gave the Scots a 28-17 cushion.

The Scots lost a fumble inside the Sherman 10-yard line on their next possession. But after the defense forced a quick three-and-out, HP took over at the Bearcats 32.

Heis pulled in a jump ball over a defender along the right sideline for a 26-yard touchdown catch with 9:37 left in the game, ballooning the margin to 18 points.

Earlier, HP cashed in a turnover in the second quarter. Preston Taylor recovered a fumble at the Sherman 26-yard line, and two plays later, Reeves reached the end zone to give the Scots the lead for good at 14-10.

Sherman was unable to capitalize on HP’s lone turnover of the first half when Cody Mitchell jumped on a fumble at midfield with 9:35 left in the second quarter. The Bearcats led 10-7 at the time.

Sherman reached the HP 6 on its first drive of the game before a sack by HP’s Jack Curtis forced the Bearcats into a field goal.

HP needed just five plays to respond. Reeves had four carries on the opening march, the last up the middle for a 5-yard touchdown.