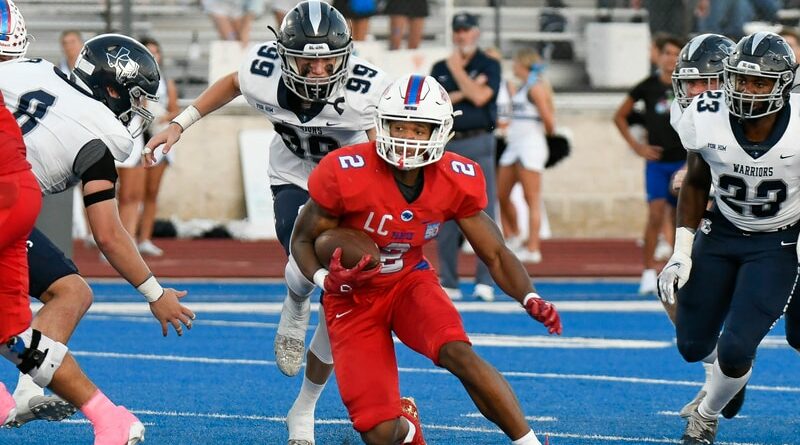 Facing its first TAPPS opponent of the season on Friday, Parish Episcopal showed why it has been arguably the top private school team in the state for two years running.

The Panthers rolled past Argyle Liberty 45-14 in their district opener at Snyder Stadium, with freshman quarterback Sawyer Anderson leading the way.

Anderson threw for 260 yards while completing 14 of 20 passes, including a 78-yard dime to Nathaniel Hill for a touchdown in the second quarter.

(See scenes from the game here.)

So far, Anderson has been a promising replacement for four-year starter Preston Stone, who finished his high school career with 15,357 yards and 182 touchdowns and is now at SMU.

“He’s been more than pretty good,” Parish head coach Daniel Novakov said of Anderson. “He has been outstanding as a freshman. We try to take as much pressure off of him and put it on ourselves, but there is only so much we can do at that position.”

Parish scored on its first four possessions. After a pair of fourth-down conversions and two sacks by Tre Williams, the Panthers (3-1) led 28-0 at halftime.

Andrew Paul rushed for 108 yards on eight carries with two touchdowns, one of which went for 38 yards in the first quarter and the other for 48 yards in the third quarter. Hill was Anderson’s top target with six catches for 139 yards. Keegon Addison and Blake Youngblood also scored.

The Parish defense collected four sacks in the first three quarters and recorded two interceptions, including a pick-six by Daniel Demery for the Panthers’ final touchdown of the game.

The Warriors (1-2) got off to a rocky start with a fumble, followed by a false start, and a sack on their first possession. Jacob Vaughan was 25-of-43 passing with two touchdowns for Liberty.