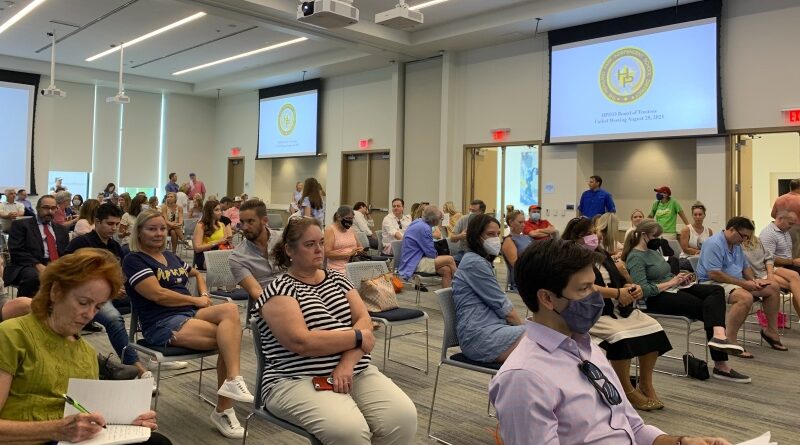 After a nearly four-hour-long meeting Saturday in which physicians and some parents pled with Highland Park ISD trustees to implement additional protocols — including an expectation that students and staff wear masks — while others pled to keep masks optional, the community remained divided on the subject and the district’s policy on masks remained unchanged.

Highland Park ISD started the school year with masks being optional in keeping with Gov. Greg Abbott’s executive order banning mask mandates, and, on advice from legal counsel, they will remain so after Saturday’s meeting.

The meeting happened amid rising COVID-19 cases and hospitalizations in North Texas and in the district, where district officials say a kindergarten class at Armstrong Elementary temporarily pivoted to virtual learning for about the next 10 days because of COVID cases. Armstrong has one active staff case and 10 active student cases, according to the district’s COVID-19 dashboard. Districtwide, there were 28 staff cases and 87 student cases reported as of Aug. 28.

Trustee Stacy Kelly added that the district has a student hospitalized with COVID-19 for the first time.

More than 160 physicians (most of whom have children in Highland Park ISD), though, signed on to a letter prior to the meeting calling on Superintendent Dr. Tom Trigg and the school board to “establish the expectation that all students and staff wear masks in all grades, as outlined by the Centers for Disease Control and Prevention (CDC) and the American Academy of Pediatrics.” Some of the letter’s signatories called for increased safety measures at Saturday’s board meeting.

Dr. Julie Trivedi, who specializes in infectious diseases and has two children in the district, said the rising case count shows the district should implement additional safety protocols, including masks.

“The fact is that the number of cases that have occurred in the past week, even leading to the closure of a kindergarten class, has shown that the district needs to take a firmer stance on how we can allow our children to come safely to school,” Trivedi said. “I can give many real-world examples of how masking has been beneficial at our institution.”

Trivedi’s comments were met with jeers and a  call of “who cares?” from an audience member.

Kelly then pleaded with the audience not to cheer or jeer during the comments and was also met with heckling, including from one audience member who called “take your mask off.”

“It shouldn’t be that hard for us to be respectful with one another. We are neighbors,” Kelly said. “So I am asking, I’m begging, I am pleading that we all just do nothing after everybody speaks so that we can get through this.”

Dr. Manish Assar, who’d also signed on to the letter from physician parents, called for the district to make precautions like masking a priority.

“There are several medical studies that substantiate the fact that masks do work, especially in schools when everyone is required to wear a mask,” Assar said to jeers. “If you’re interested, and every parent I know is, in keeping the kids in school, there’s going to have to be a universal masking policy.”

Assar added that he believes the district’s policy of ‘recommending’ masks “failed.”

“Hardly anybody is wearing a mask and even many students who are trying to do the right thing by wearing a mask, they stopped wearing them because no one else was giving them the priority, not the teachers, not the administrators, not the vast majority of students. It starts at the top,” he said.

“I want to recommend that we as a school district follow the full guidance of Governor Abbott and take personal responsibility and do a better job of keeping our kids in those schools,” Ellis said. “What we don’t disagree on is keeping kids in schools.”

Former HPISD trustee candidate Kelli Macatee, who ran against trustee Doug Woodward in May, warned “the mask issue is a losing issue for the district.”

“People have already made up their minds. We have heard that in spades over and over again and it’s on either side. It has to be a choice,” Macatee said. “It’s not the district’s responsibility to care for my personal health.”

Dakota Wulff, a student, also said she didn’t want to be forced to wear masks in school.

“I believe that it is not right that last year we were forced (to wear masks),” Wulff said. “Please, please don’t force us to wear a mask this year.”

Sue Berk said she has two children in the district, called for the district to continue following Abbott’s order regarding masks.

“I don’t know why we’re having this meeting,” Berk said. “I want to say that my children will not be wearing masks no matter what.”

Tensions regarding masks also spilled out of the school board meeting room Saturday. Saturday morning, before the district’s 1 p.m. meeting, a modest group of protesters also gathered at Mockingbird Lane and Douglas Avenue across from Highland Park Village carrying signs that read “don’t mask our children,” “freedom from medical tyranny,’ and ‘give us liberty not mandates.’

Stephanie Magilow, who has two students in the district, also called on the district to record and post their meetings online.

“I hope that you all start recording it … my mother-in-law is a two-time cancer survivor … she has every right to know what’s going on in this district as do other people in her generation,” Magilow said.

Trigg said that’s something the district is considering, but in the meantime, People Newspapers is livestreaming HPISD’s board meetings on our Park Cities People Facebook page and then sharing them on our People Newspapers YouTube channel. The videos from Saturdays meeting are available below.

The district is also in the process of selecting medical professionals to join the pandemic response committee.