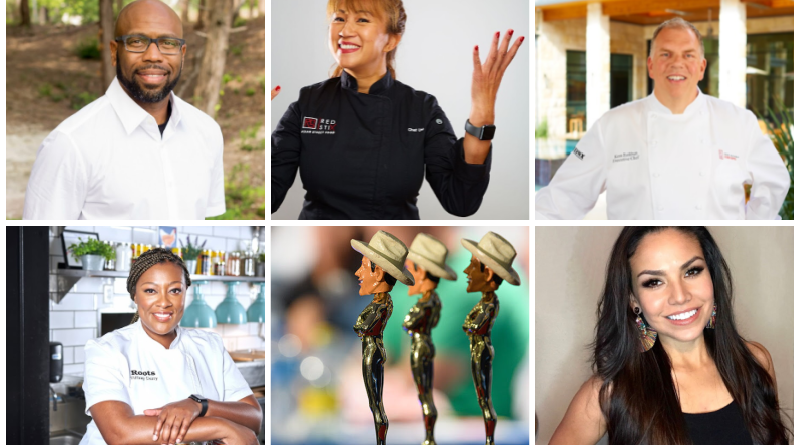 It’s time to discover who will name the winners of the 17th annual Big Tex Choice Awards, and the State Fair of Texas has lined up some familiar faces to pick the winners.

This year, a total of 43 entries were submitted, then narrowed down to 32 semi-finalists — 19 savory and 13 sweet entries. Of these 32 entries, 10 entries will compete live in the final round at this year’s Big Tex Choice Awards event. The members of the judging panel will be faced with the difficult task of deciding which food concoctions will take home the titles of “Best Taste – Savory,” “Best Taste – Sweet,” and “Most Creative.”

Although this year’s Big Tex Choice Awards event is closed to the public, this panel of distinguished judges, whose personalities range from local celebrities to renowned chefs, have the very hard job of tasting these deep-fried delicacies and crowning the winning dishes.

Beaumont, Texas native Tiffany Derry is the founder of Tiffany Derry Concepts and co-founder of T2D Concepts, the Texas-based purpose-driven hospitality group behind Roots Chicken Shak, Roots Southern Table (opening spring 2021), and ‘Shef Tiffany spice and apparel line. Denied from her first cooking job at the age of 15 because of her race and gender, Tiffany has risen her way through the culinary ranks to run her own restaurant concepts, appear as a contestant and judge on Top Chef and Top Chef Junior and as a regular advisor on Bar Rescue, and cook for President Obama at the White House. A fierce advocate for sustainable and nutritious food policies as well as gender and racial equity, Tiffany serves as a member of Les Dames d’Escoffier, a spokesperson for the James Beard Foundation’s sustainability efforts, and sits on the Board of Directors for Food Policy Action.

Uno Immanivong was named for the United Nations Organization (UNO) refugee camp in Thailand where she was born to Laotian parents. Growing up in Texas, she learned to cook from her mom, who catered Thai and Lao weddings, and who kept an overgrown garden that provided plenty of mint, Thai basil, Thai chilies and tomatoes for the family table. In 2012, with a successful, 16-year career in banking under her belt, Uno — who always had a dream of nourishing people with food — auditioned for The Taste, a reality cooking show. Anthony Bourdain, one its stars, chose Uno to mentor on his team, and she competed in four episodes — a life-changing experience. Empowered to pursue her passion, she left banking and opened her first restaurant: the hugely popular and critically acclaimed Chino Chinatown in Dallas. In 2017 Uno debuted Red Stix Asian Street Food in a food hall — Legacy Hall in Plano; in 2019 she opened the first permanent location, in Dallas near SMU. Accolades followed, and now a second Red Stix — in Farmers Branch — is planned for September 2021. Uno’s portfolio also includes Chef Uno Brands (a hospitality consulting firm) and Chef Uno Catering.

Donovan Lewis is the co-host of the World’s Most Dangerous Midday Show The Norm and D Invasion, heard 10 a.m – noon on SportsRadio 96.7/1310 The Ticket. Donovan has been at The Ticket since May 2006 after stops at 570KLIF and 93.3 The Bone. Born and raised in Dallas, Donovan attended Business and Management Center Magnet High School in 1988 and attended East Texas State University (now Texas A&M University) where he graduated with a degree in Radio/TV in 1993. The State Fair of Texas is a second home as he attends at least twice a week during the state fair’s run.

Celebrity chef Kent Rathbun has been a respected leader in the Dallas restaurant scene for three decades. His culinary interest was sparked at age nine, venturing into fine dining and service during his high school years. After honing his skills and working with some of the most creative culinary teams in the county, he took his culinary vision to the next level by creating Abacus. A world-class fine dining restaurant, Abacus was inducted into the Nation’s Restaurant News Fine Dining Hall of Fame, earned Forbes Four-Stars and AAA Four Diamonds, and was named “One of the Top Meals Around the World,” by USA Today. Rathbun has appeared on many shows, including Food Network, Cooking Live with Sara Moulton, Ready Set Cook, CBS Early Show, and the pre-Superbowl event Taste of the NFL. Rathbun has cooked for many celebrities including Queen Elizabeth, Julia Childs, Ross Perot, George Michael, Oprah, Anthony Bourdain, Jacques Pépin, and was a featured chef for the Bush 2001 Inaugural Ball. Rathbun lives in Dallas with his two children and wife and fellow restauranteur, Tracy Rathbun. Together, they co-own local Dallas favorites, Imoto, Shinsei, Lover’s Seafood & Market, and Catering by Chef Kent Rathbun.

Born and raised in North Oak Cliff, Michelle has been a State Fair of Texas fan from the womb – there isn’t a year she hasn’t attended the Fair. She was lucky enough to start her career in country radio here in Dallas 17 years ago and was recognized for having one of the best radio shows in Dallas, recognized by the Country Music Association Award, a nominee for the Academy of Country Music Awards, and nominated for the 2021 Marconi Award for Major Marker Radio Personality of the Year. You can hear Michelle co-hosting weekday mornings, 5:30 a.m. to 10:00 a.m. on the Hawkeye in the Morning Show on New Country 96.3 KSCS. She’s a lover of all things music and all things (fried) food.

The 2021 Big Tex Choice Awards will take place on Sunday, August 29, starting at 2 p.m. Spectators can watch the judging live on the Fair’s social media channels – @StateFairofTX, and can also RSVP on the Facebook event page, available at BigTex.com/BTCA, to receive notifications in real-time as the event takes place.

The 2021 State Fair of Texas opens on Friday, Sept, 24 and runs through Sunday, Oct. 17. You can purchase season passes and premium tickets online at BigTex.com.