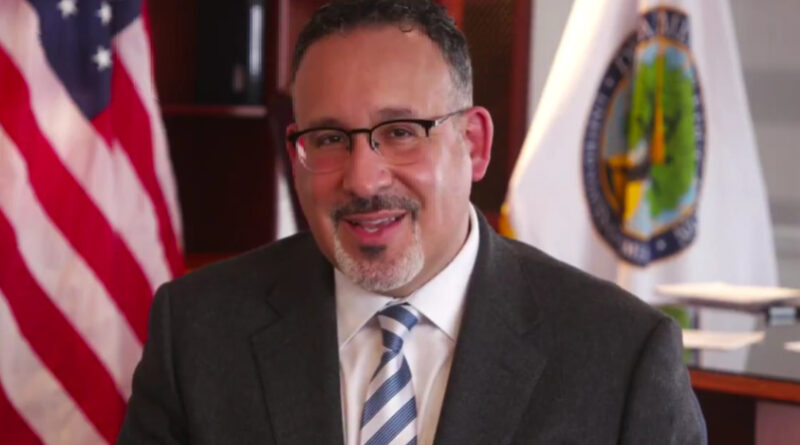 It was the first day of school in a brand new school, and Dallas ISD Superintendent Michael Hinojosa was on hand to chat with teachers and the smallest of his district’s students, with reporters and photographers trailing behind him.

“That looks like a hamburger!” he told one student who was playing with Play-Doh at a table. “Don’t eat that hamburger, it might make you sick.”

But for all the joy in the form of balloons, fun music, and a dancing mascot, when Hinojosa met with reporters after the tour in the library, the questions were all about the district’s mask mandate.

Sunday afternoon, the Texas Supreme Court issued a stay on a temporary restraining order on Abbott’s executive order banning mask mandates, at the request of Gov. Greg Abbott and state Attorney General Ken Paxton. Hearings on the matter will continue in lower courts, but the state Supreme Court could still also rule.

But Sunday night, Hinojosa met with reporters virtually to announce that the district’s mask mandate would remain in place because the stay only mentioned Dallas County and Bexar County.

“My decision is that we’re going to continue with the mask mandate at this time,” he said Sunday night.

Monday morning, he said that overall, he was pleased with the community’s response, but did say not everyone was pleased, with one parent calling to tell him they would be suing him, possibly today.

He also knows that he could face fines for the requirement since Abbott’s order said organizations enacting a mask mandate could be fined up to $1,000.

“I do not know if it is a one-time fine or multiple fines, but I’ve had a lot of people volunteer to pay the fine for me,” Hinojosa said.

State Sen. Jose Menendez said that he would begin fundraising to help offset the fines and legal fees for districts who opt to continue with a mask mandate. Other organizations like Safe Schools for All and People First Future have also begun similar fundraising efforts.

Hinojosa said that students that didn’t wish to comply would be dealt with firmly, but also with understanding. They would be offered a mask, and if they continued to refuse, they would be separated from the rest of the students.

“The president said he was proud of us for making this opportunity available to our students. He thanked me for having the courage to stand up for our students and our community.”

Hinojosa said that the district was working to offer a virtual option for some parents by Aug. 24, but without state funding, the price tag will be somewhere in the neighborhood of $100 million.

“That’s why we have a healthy reserve,” he said, adding that “if ever there was a rainy day, this is it.”

And while he hasn’t had any communication with Abbott, he did get a voicemail from President Joe Biden.

“The president said he was proud of us for making this opportunity available to our students,” he said of the message. “He thanked me for having the courage to stand up for our students and our community.”

Last week, Education Secretary Miguel Cardona also weighed in on the matter in a letter to Abbott and Texas Education Commissioner Mike Morath.

“Texas’s recent actions to block school districts from voluntarily adopting science-based strategies for preventing the spread of COVID-19 that are aligned with the guidance from the Centers for Disease Control and Prevention … may infringe upon a school district’s authority to adopt policies to protect students and educators as they develop their safe return to in-person instruction plans required by Federal Law,” Cardona wrote.

Cardona also explained that the American Rescue Plan Act of 2021 requires each local educational agency (or LEA) that gets elementary and secondary school emergency relief funds to adopt a safe return to in-person instruction plan, and that the Department of Education requires that the plan “must describe … how (the LEA) will maintain the health and safety of students, educators, and other staff and the extent to which it has adopted policies, and a description of any such policies” in regards to safety recommendations established by the CDC, including universal mask wearing and contact tracing.

The education secretary said that his department is concerned that the state’s actions could limit school districts’ ability to adopt a plan for safe return to school as the act requires.

“The Department recognizes that several LEAs in your State have already moved to adopt such policies in line with guidance from the CDC for the reopening and operation of school facilities despite the State-level prohibitions,” he said. “The Department stands with these dedicated educators who are working to safely reopen schools and maintain safe in-person instruction.”

Cardona also indicated that he had spoken to Morath in July and Abbott in August.