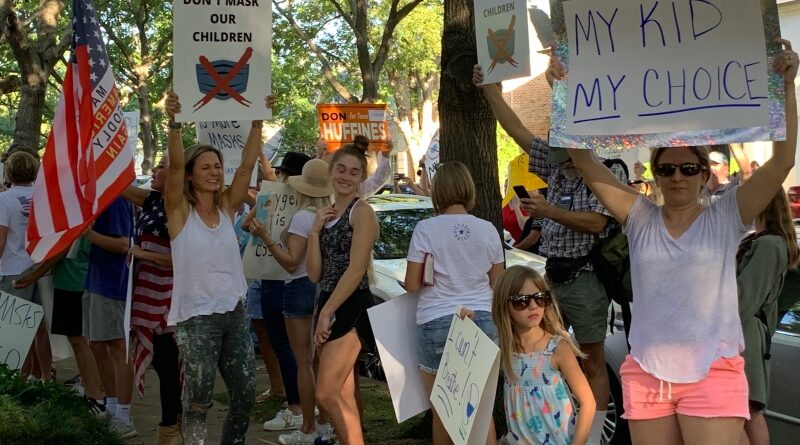 A day after Dallas County Judge Clay Jenkins signed an executive order requiring masks in many indoor settings amid a surge in COVID cases and hospitalizations, a modest crowd of protesters gathered outside a Highland Park townhome believed to belong to Jenkins chanting “we will not comply,” “I can’t breathe,” and “no freedom, no peace.”

Jenkins’ order signed Wednesday requires masks in childcare and pre-K-12 schools, county buildings, and commercial entities for everyone older than 2 years of age. It was revised Thursday to include public colleges and universities.

(Read: Jenkins Amends Order to Include Colleges and Universities)

Despite that, the protesters against the mask requirement outside the home Thursday didn’t all appear to be in Abbott’s corner either. The protesters carried signs saying “we will not comply,” “no masks in the HPISD,” and “don’t mask our children,” and some supporting Gov. Greg Abbott’s GOP primary opponent Don Huffines.

Huffines, a former state senator, announced his intent to run against Abbott in the gubernatorial primary in May.

Huffines’ daughter, Deirdre Hairston, made headlines back in March after she refused to comply with requests to wear a mask during Mass at Holy Trinity Catholic Church and was escorted out by police.

Sara Wilcox was among the protesters and said she has a 5 year old that attends school in Highland Park ISD and a 4 year old who attends a private school and argued children shouldn’t be required to wear masks in schools.

Another protester also yelled “take your mask off” to a masked journalist, and still another insisted “there’s no COVID outside.”

Highland Park Department of Public Safety staff were on scene to monitor the protest.

Dallas County’s mask mandate, and the backlash against it, comes amid a surge in COVID cases and hospitalizations attributed to the highly contagious delta variant.

D CEO’s Will Maddox reported Thursday that there are zero staffed pediatric ICU beds available in the 19 counties that comprise Trauma Service Area E, with Children’s Medical Center reporting a patient census that has increased 600% since June 20, when there were just six pediatric COVID patients.