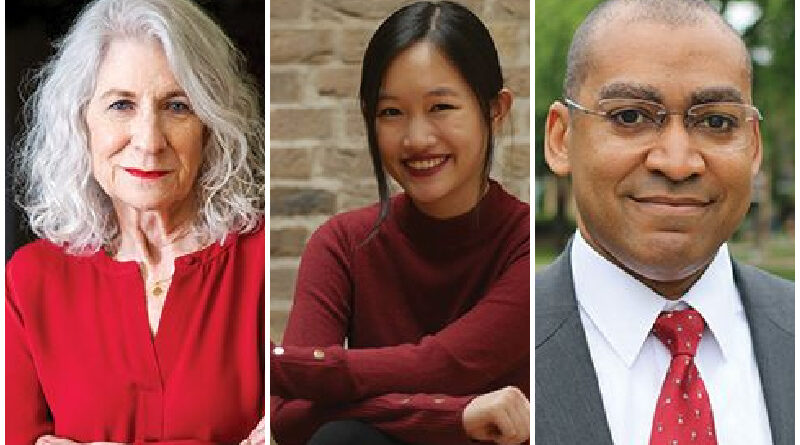 The Greenhill School Alumni Board announced this summer that it had chosen to honor a lawyer, a novelist and scholar, and a noteworthy current alumnus who helped guide the school through a pandemic as recipients of the group’s annual alumni awards.

Nancy Hollander, class of 1961, and Rebecca F. Kuang, class of 2013, were named Distinguished Alumni. Holland P. Gary, class of 1993, was given the Alumni Service Award.

The Distinguished Alumni Award honors alumni who have achieved prominence in their field through their personal and professional endeavors. The Alumni Service Award honors a graduate for outstanding service and dedication to the school.

Recipients were selected by a committee of Greenhill Alumni Board members and School administrators from nominations submitted by the Greenhill community. An in-person community celebration is planned for Homecoming weekend in October 2021.

Hollander is an internationally recognized criminal defense lawyer. She joined the firm of Freedman, Boyd, Hollander, Goldberg, Urias & Ward P.A. in 1980, becoming a partner in 1983.

For more than three decades, her practice has largely been devoted to representing individuals and organizations accused of crimes, including those involving national security issues, in trial and on appeal. She was lead appellate counsel for Chelsea Manning in the military appellate courts, ultimately earning Manning’s release when President Obama converted her 35 year sentence for sharing classified information to seven years. She has also represented two prisoners at Guantanamo Bay Naval Base, and in 2016, she won the release of one of them – Mohamedou Ould Slahi – after 11 years of pro bono representation. His story is chronicled in his New York Times-bestselling book Guantanamo Diary, which she helped facilitate and publish. The book was adapted into the award-winning movie, The Mauritanian.

In addition to her criminal defense practice, Hollander has been counsel in numerous civil cases, forfeitures, and administrative hearings, and has argued and won a historic case involving religious freedom in the U.S. Supreme Court. A seasoned trial lawyer and respected criminal law expert, she has taught in numerous trial-practice programs. She has written extensively and conducted more than 200 seminars and presentations around the globe on various subjects, including the securing of evidence in international cases, forfeiture, illegal search and seizure, expert witnesses, defense of child abuse cases, ethics, evidence, and trial practice.

Kuang is a Marshall Scholar, Chinese-English translator, the Astounding Award-winning and the Hugo, Nebula, Locus, and World Fantasy Award-nominated author of The Poppy War trilogy and the forthcoming Babel. Her work has won the Crawford Award and the Compton Crook Award for Best First Novel. Kuang’s series of fantasy novels, including The Poppy War, is set to be adapted for television.

Kuang immigrated to Dallas from China at age four and graduated from Greenhill in 2013. She won the Tournament of Champions, a national high school speech and debate tournament, in 2013. She was the sixth woman to win the top spot in that tournament in its 28-year history. She attended Georgetown for undergraduate studies. During college, she took a year off to live in Beijing and teach debate to high school students. In her free time, she worked on her first novel, The Poppy War, which debuted in 2018. Two additional books rounded out the trilogy in 2019 and 2020.

Kuang also served as an instructor at summer debate institutes for five years running and led a mentor group for students interested in creative writing. She has an MPhil in Chinese Studies from Cambridge and an MSc in Contemporary Chinese Studies from Oxford University; she is now pursuing a Ph.D. in East Asian Languages and Literatures at Yale University.

Gary has played an active role in the Greenhill community for more than 15 years. His dedicated service started when he joined the Alumni Board in 2005 and continued as he transitioned on to the Board of Trustees in 2011. He has served on every Board committee and held leadership roles on both boards.

He is currently completing his tenure as chair of the Board of Trustees. Holland’s steady leadership helped to guide Greenhill through a global pandemic, ensuring that students continued to learn and grow while maintaining the health of the community. Holland has also helped to shape the future of the school by leading it through a strategic planning process, which culminated in the launch of Greenhill 2025: Growing Stronger Together, and, most notably, overseeing the introduction of a refined mission, vision, and core values.

“In addition to being thoughtful, deeply concerned about the well-being of Greenhill and having great strategic vision, he is an alumnus who is deeply rooted in and fiercely loyal to the School,” said former Board Chair Bruce Sostek.

Gary came to Greenhill School as a third grader in 1983. During his time as a student, he served as class president and set school records as a student athlete. He earned a BSE in Electrical Engineering from Princeton University and an MBA in Finance and Entrepreneurial Management from the Wharton School of the University of Pennsylvania. Heis the CFO of Carleton Companies and the president of Salt River Capital, a real estate finance subsidiary.

Holland and his wife Leila are the parents to Greenhill eighth-grader James and third-grader Julia.