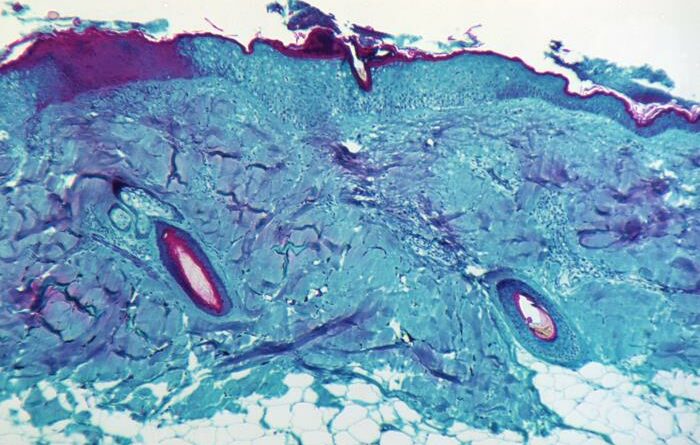 After everyone has had a nearly two-year education on the novel coronavirus, Dallas County officials announced Friday that a case of Monkeypox has been diagnosed in a resident.

In a statement released Friday afternoon, Dallas County Health and Human Services said that the patient is a Dallas resident who traveled from Nigeria to Dallas, arriving at Love Field on July 8.

The person is in stable condition and in isolation in a Dallas hospital. The Centers for Disease Control and Prevention is working with the airline and health officials to trace the passengers on that flight and others who may have had contact with the patient.

The good news, experts said, is that one way monkeypox is transmitted is via respiratory droplets — which was hampered by the requirement for mask-wearing on flights and in airports because of the COVID-19 pandemic.

The CDC is looking at any other potential risks to anyone who may have had contact with the person on the plane and in airports.

“While rare, this case is not a reason for alarm and we do not expect any threat to the general public. Dallas County Health and Human Services is working closely with local providers, as well as our state and federal partners,” said Dallas County Judge Clay Jenkins.

Health officials said that people without symptoms are not capable of spreading the virus to anyone else.

It’s transmitted when someone comes into contact with the virus from an animal, human, or contaminated materials, the CDC said in an explainer. It enters through broken skin, the respiratory tract, or mucus membranes. Animal-to-human transmission can happen by bite or scratch, bush meat preparation, contact with body fluids or lesions, or contaminated bedding. Human-to-human transmission is primarily thought to be transmitted by large respiratory droplets that cannot travel more than a few feet.

Symptoms include fever, headache, muscle aches, swollen lymph nodes, chills, and exhaustion. About one to three days (on average) after the onset of fever, a rash develops (usually on the face first). The incubation time is usually seven to 14 days, but can be as long as five to 21 days.

“We have been working closely with the CDC and DSHS and have conducted interviews with the patient and close contacts that were exposed,” said DCHHS Director Dr. Philip Huang.  “We have determined that there is very little risk to the general public. This is another demonstration of the importance of maintaining a strong public health infrastructure, as we are only a plane ride away from any global infectious disease.”

According to the CDC, monkeypox is relatively rare, with the first human case of monkeypox recorded in 1970 in the Democratic Republic of Congo. The U.S. had a 47-person outbreak in 2003, but this current infection is believed to be the first for the state.

The county said that the case was confirmed by a lab, and officials are also working with Nigerian health officials to determine how the person contracted the disease.

According to the City of Dallas, Love Field officials are working with public health officials, and Dallas Fire-Rescue paramedics are “well-equipped to evaluate and care for additional symptomatic patients should there be any.”

“We have been in close contact with Dallas County Health and Human Services, the city’s contracted public health authority, regarding the single case of travel-related monkeypox in Dallas,” Mayor Eric Johnson said. “We have confidence in the federal, state, and local medical professionals who are working to ensure that this virus is contained and that the patient is treated with the utmost care. The City of Dallas stands ready to assist their efforts in any way necessary.”

Last month, the U.K. reported two cases in Wales. The World Health Organization said it’s primarily found in Africa, where 11 countries have reported cases since its discovery in 1970, and is very rarely found outside of the continent.