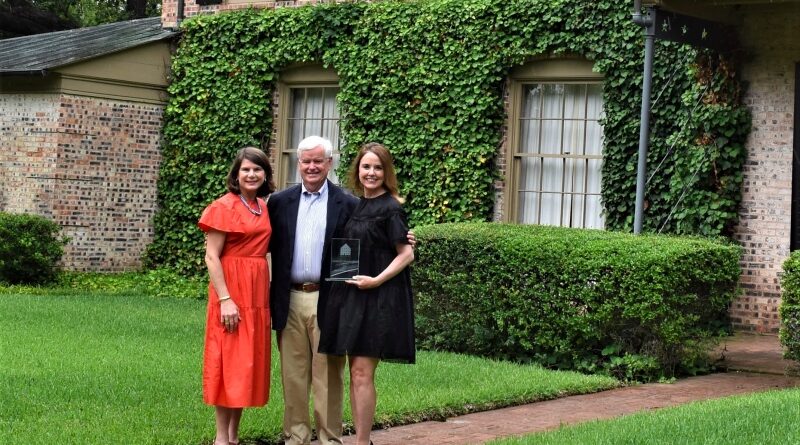 The Park Cities Historic and Preservation Society recently received a Spirit of Preservation Award by Preservation Dallas along with Jan and Trevor Rees-Jones for preserving the Elbert Williams home at 3805 McFarlin Boulevard.

The historic home was built in 1932 for former University Park Mayor Elbert Williams. The 6,000 square foot house sits on 1.15 acres.

The house, named among the most historically and architecturally significant in the state, was designed by architect David R. Williams, father of the Texas Regionalism style. The residence is considered the first example of the style.

It was Williams’ last residential project and features hand-carved interior woodwork by  Lynn Ford, a mural painted by Jerry Bywaters which was later removed, abundant lone star ornamentation, and passive cooling features such as one room deep rooms for better air flow, covered overhangs, and more.

In 2016, the home was added to Preservation Dallas’ Most Endangered Historic Places list because of the threat of it being sold and demolished after its previous owner died.

In December of 2020, the residence was sold to Jan and Trevor Rees-Jones. The Rees-Jones’ have committed to preserve the home and keep it safe from demolition.

The Spirit of Preservation Award was given to the couple for their efforts to preserve the Elbert Williams house.

Preservation Dallas believes it marked first time that an endangered residential landmark has been saved from being demolished in the Park Cities.