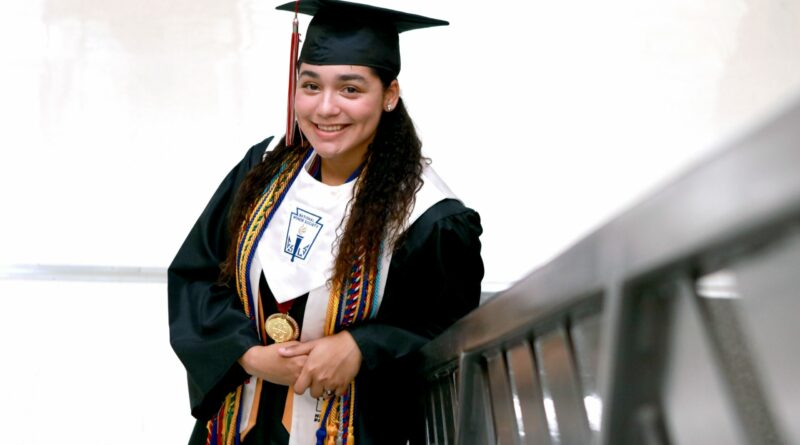 Paolaenid Rodney-Hernandez has been on the path to study neuroscience since she was in ninth grade, and has not missed a single academic or athletic opportunity that has presented itself along the way.

Having already finished two years’ worth of college credits while in high school, the Hillcrest E-TECH graduate will start the Fall 2021 semester as a medical neuroscience student and an official member of the Power Dancers at the University of Texas at Dallas.

“Since elementary school, Dallas ISD has taught me how to become disciplined in several aspects of my life and has opened many doors for me, for which I am very, very grateful.”

“I have over $400,000 in combined scholarship offers from the 14 universities that I was accepted to,” Rodney-Hernandez said. “My mom is a single parent and I have a younger sister who will be a high school junior next year. I chose UT Dallas because they offered the program that I wanted to pursue, along with the financial aid and scholarships.”

During her high school career, Rodney-Hernandez was a varsity tennis player, the girls swimming captain and co-captain of the Calculator Applications team. Her classmates named her junior secretary of Hillcrest’s National Honor Society and senior lieutenant of Hillcrest’s Panaders Drill Team Dancers. She competed in the Texas Academic Decathlon, where she earned a perfect score in the interview event, along with first place at State.

Along with her high school diploma, she earned an Associate of Science Degree from Dallas College, Richland Campus, and was accepted at UT Dallas School of Behavioral and Brain Sciences. The university offered Rodney-Hernandez approximately $20,000 in scholarships, and she earned an additional $10,000 in community-based scholarships.

“I’ve been involved in several student organizations, learned sisterhood with my dance team, sportsmanship with tennis and pushed my mental limits with many challenging dual-credit classes,” Rodney-Hernandez said. “Since elementary school, Dallas ISD has taught me how to become disciplined in several aspects of my life and has opened many doors for me, for which I am very, very grateful.”