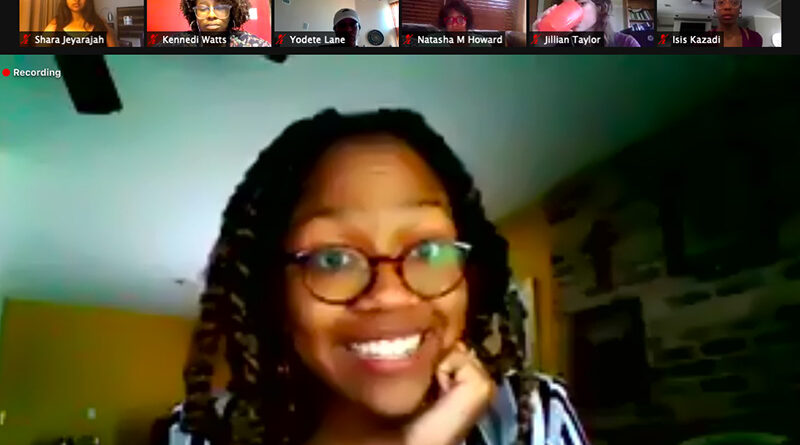 Students in SMU’s Meadows School of The Arts turned five tweets shared by students using the #BlackAtSMU hashtag into a documentary.

Students first used the hashtag to share their experiences of racism on campus in 2015, and stories proliferated again last summer after the murder of George Floyd and protests for racial justice.

After about nine months of work by the production crew and cast, including co-directors rising senior Crislyn Fayson and rising junior Aysia Lane, producer Jillian Taylor, and others, the movie premiered on Dallas Hall Lawn this spring.

“When it came out, the students had an amazing reaction. It was beautiful,” Fayson said.

The idea to make the stories into a documentary grew out of one of SMU film and media arts assistant professor Amber Bemak’s classes as students researched topics around racism on campus.

“If we didn’t care about SMU, we wouldn’t have made the film.”

The film began with the story of SMU alumna Anga Sanders, who graduated in 1970. She spoke about burning small Confederate flags to protest a tradition known as “Old South Week,” when the Kappa Alpha fraternity would hang Confederate flags.

The film then told the stories of a student who recalled hearing chants of racial slurs on campus after the election of former President Donald Trump and another called a racial slur at a fraternity party. Still, another was asked to read Sojourner Truth’s “Ain’t I a Woman?” in a “plantation dialect.”

“I personally feel like conversations about things that are hard to talk about or uncomfortable, or not fan favorites are typically what sparks the most change,” Lane said. “I think SMU needs some conversations and to sit down and have talks about race on campus and race relations.”

She added that the documentary was “made from a place of wanting to get better together.”

“If we didn’t care about SMU, we wouldn’t have made the film,” Lane said.

The filmmakers hope professors and students will use the documentary to educate about racism.

“This film is meant to go beyond the screen and really be about conversation and discussion,” Bemak said after a recent virtual screening.

ESPN to Highlight SMU’s Sordid Past