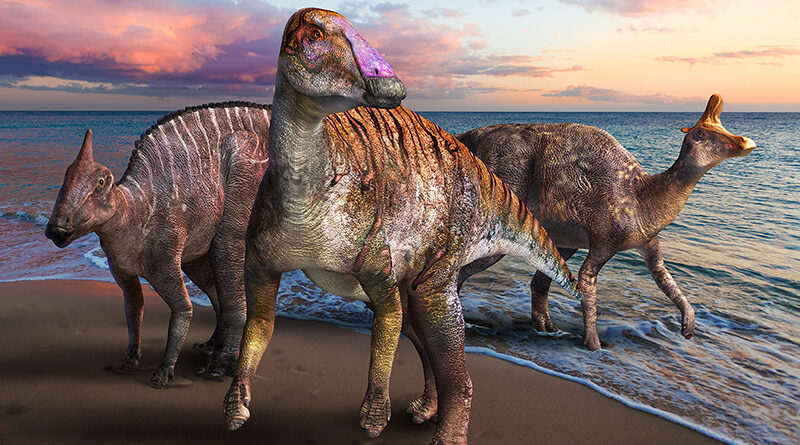 Yamatosaurus Izanagi, so named by Yoshitsugu Kobayashi of Hokkaido University Museum and Anthony R. Fiorillo of SMU, is the second new Japanese hadrosaurid discovery reported by the longtime colleagues. They have worked together since 1999 when Kobayashi was a Ph.D. student at SMU.

“Until now, we had no idea what dinosaurs lived in Japan at the end of the dinosaur age,” Kobayashi said.

They took their latest discovery’s name from Yamato, the ancient name for Japan, and Izanagi, a god from Japanese mythology who created the Japanese islands, beginning with Awaji, where Yamatosaurus was found in 2004 by an amateur fossil hunter.

The fossilized discovery yields new information about hadrosaur evolution and migration, suggesting that the herbivores used the Bering Land Bridge to migrate from Asia to North America instead of vice versa.

“In the far north, where much of our work occurs, hadrosaurs are known as the caribou of the Cretaceous,” Fiorillo said.

The hadrosaurs had broad, flattened snouts and lived in the Late Cretaceous period more than 65 million years ago.

An up and coming scholar

Dominique Baker, who joined the SMU faculty in 2016, has earned national recognition for her research into how education policy shapes the access and success of minoritized students in higher education.

This spring, the assistant professor of education policy in the Annette Caldwell Simmons School of Education and Human Development received the 2021 Early Career Award from the Association for Education Finance and Policy.

The $1,000 prize recognizes a junior scholar who shows an exemplary early career trajectory and whose research substantially contributes to the field of education finance and policy.

“Education policy has the ability to transform lives, but only if thoughtfully constructed based on evidence that includes the experiences of the folks directly impacted,” Baker said. “I look forward to continuing to promote justice by focusing on the ways that policies distribute power and resources.”

A $5 million gift from longtime SMU supporters Mary and Rich Templeton will bolster student excellence and doctoral research in SMU’s Lyle School of Engineering through endowed scholarships and fellowships.