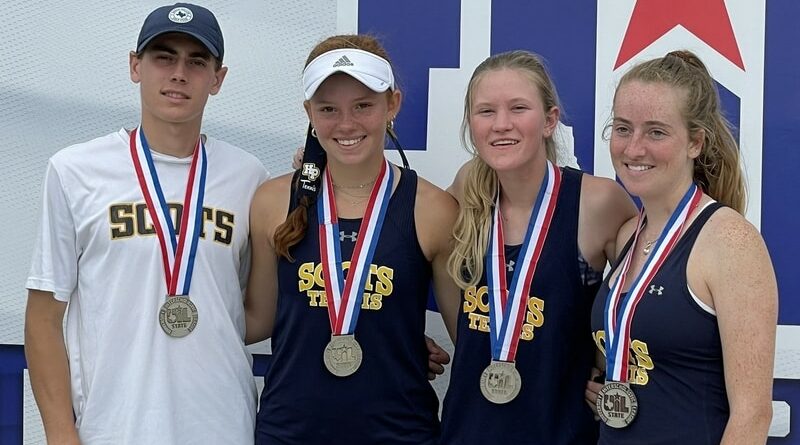 After winning the Class 5A state title in team tennis during the fall, Highland Park didn’t bring home any top prizes from the spring state tournament.

However, the Scots still claimed a pair of silver medals from its doubles tandems on Friday in San Antonio. Hayden Bethea and Cambelle Henderson were the runners-up in girls doubles, as were Ray Saalfield and Isabella McElfresh in mixed doubles.

Bethea and Henderson won their first two matches in straight sets against teams from A&M Consolidated and Kerrville Tivy. They fell to in the final to Tamiya Lintz and Saundarya Vedula of Frisco Heritage, 6-0, 6-2.

Meanwhile, Saalfield and McElfresh also reached the championship match after winning a three-set thriller over Dripping Springs in the quarterfinals, followed by a hard-fought victory against Friendswood. Their 6-4, 6-4 defeat came at the hands of Amarillo’s Jackson Harwell and Eleanor Archer.

HP finished its season without any spring tennis titles for the first time since 2016, and saw its three-year championship run end in 5A mixed doubles. However, both Saalfield and McElfresh are juniors and will return next season.