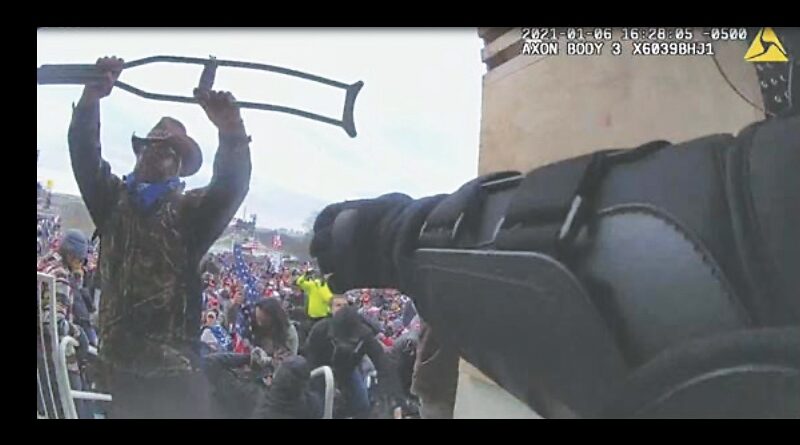 Before going to the U.S. Capitol during the Jan. 6 riot where he allegedly brandished a crutch, and charged at officers, Highland Park-bred Luke Coffee found QAnon conspiracy theories online.

Coffee, 41, faces multiple charges in connection with the Jan. 6 riot, including assault of a federal law enforcement officer with a dangerous weapon and disorderly conduct on Capitol grounds, court documents show.

“I can’t imagine — who possessed him  to think the way that he was thinking because I don’t believe he was a Trump supporter. I believe that he truly believed these were the last days,” said Becky Jane Romine, a friend of Coffee’s who acted alongside him in the 2007 comedy Cake: A Wedding Story. “He said he was going — his intentions were not to create chaos when he went to the Capitol.”

In late January, he told Texas Monthly from a Hill Country resort where he stayed and spoke with FBI agents before his arrest in February that he went to Washington D.C. to “be part of history” and “to bring all this criminal behavior to light.”

He returned to Dallas from Washington D.C. Jan. 6, and turned himself in at the Earle Cabell federal courthouse Feb. 26.

The chief judge of the U.S. District Court for the District of Columbia April 9 affirmed a magistrate judge’s decision to grant Coffee’s release pending trial under certain conditions, including that he submit to location monitoring and avoid all contact with “anyone associated with the incident on January 6, 2021.”

Prosecutors argued in court documents that Coffee had “charged at the officers while still holding the crutch” and posed a “serious risk of flight.”

His defense lawyer, Jim Burnham, however, argued Coffee was “not a violent man, but rather a peacemaker” who “tried to stop the riots and prayed for peace.”

People Newspapers reached out to the U.S. Marshals office of public affairs to confirm whether or not he had actually been released, but didn’t hear back by press time.

Coffee graduated from Highland Park High School and went to Baylor University. After graduating from Baylor, he worked in Los Angeles for five years, during which time he worked as the post-production coordinator for such shows as “Everwood” and “Las Vegas,” according to his IMDb page. Coffee returned to Dallas around 2010 and started a production company.

He was dating a woman from Dallas who was killed in a hit-and-run crash in 2006 at the age of 22, Texas Monthly reports.

Family members told the magazine that Coffee became withdrawn and depressed after the accident.

“I’m telling you, it blew his mind when he lost (his girlfriend) so quickly…it messed him up,” Romine added. “He really loved that girl.”