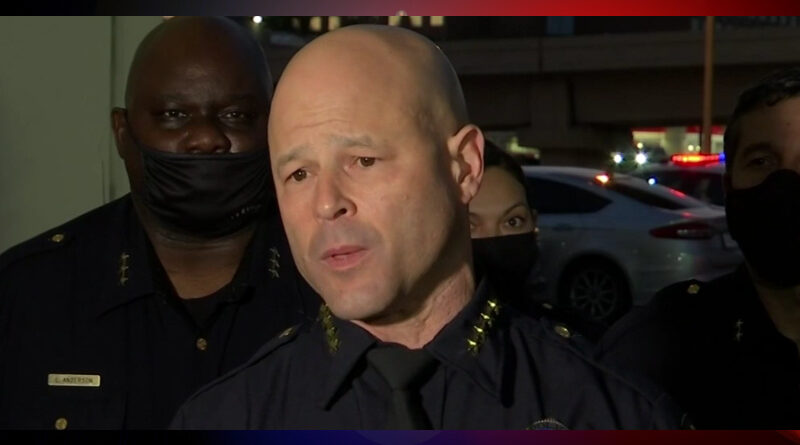 UPDATED throughout with more information from Dallas police.

Dallas police fatally shot a man brandishing what was later found to be a replica firearm after he reportedly stole from a nearby CVS near Coit Drive and Interestate 635 Monday evening.

Dallas police said that officers responded to a call around 4 p.m. regarding a man walking around with a gun in the 14000 block of Rolling Hills Lane, where he reportedly attempted to carjack a motorist near a school, Dallas Police Chief Eddie Garcia told reporters Monday night.

“Upon officers arrival, they encountered the suspect, at which time he pointed a handgun at the officers and fled on foot,” a statement from Dallas police said. “The officers called for cover and began to set up a perimeter.”

At 4:32 p.m., officers confronted the suspect on Esperanza Road.

“The suspect reached into his back waistband, produced a handgun, and pointed it at officers – the officers did not fire upon the suspect,” Dallas police said, adding that he then ran through the parking lot of an apartment complex.

About 30 minutes later, a call from a nearby CVS found that someone matching the description of the man had stolen from inside the store, pointed his gun at a manager, and then fled on foot after exiting from the back door.

Roughly 10 minutes later, a 911 call reported a man with a gun on foot.

An officer then saw the man flee to a nearby business before running across 635 and then heading to the eastbound service road of Interstate 635, encountering uniformed officers and squad cars.

Officers, and then Dallas Fire and Rescue, provided medical attention to the suspect at the scene before he was transported to Texas Health Presbyterian Hospital Dallas, where he later died of his injuries.

“It was later determined the gun was a replica firearm,” police said. Much of roadway around the incident was closed to motorists until fairly late in the evening Monday as police investigated.

Garcia later said that prior to the carjacking report, an armed robbery was reported at a nearby Fiesta supermarket around 2:30 p.m. That suspect’s description matched the suspect that was shot.

Garcia said the department would release a photo of the replica firearm sometime Tuesday.