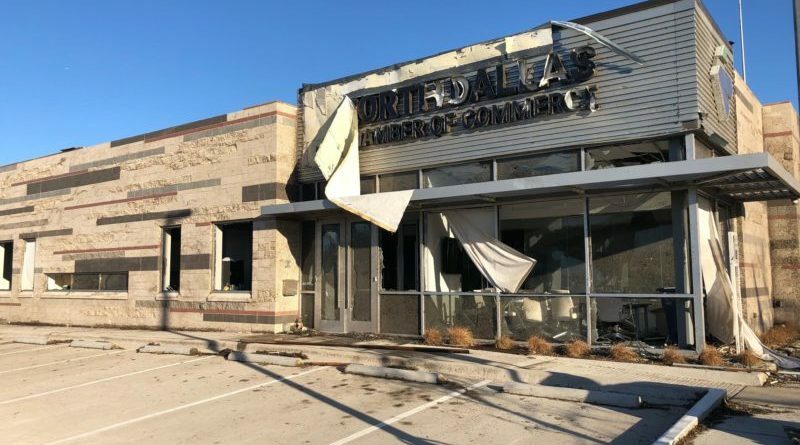 The North Dallas Chamber of Commerce’s Preston Royal headquarters was a year-and-a-half old building and already serving as a gathering site for plenty of events – from Dallas ISD bond package explainers to candidate forums to networking events – when an EF3 tornado hit the building almost head on.

The chamber offices were on the southwest corner of Preston Road and Royal Lane, which took a hit from the tornado as it bounced down Royal Lane, striking the Benchmark Bank building and the adjacent shopping center and the surrounding neighborhood, tearing through the Preston Oaks shopping center on the southeast corner, and scraping the farthest southern edge of the Preston Royal Shopping Center and the St. Marks campus to the south before traveling through the neighborhood behind the school.

“It’s only about a year and a half old,” chamber COO Jeff Kitner said at the time. “The windows have all been blown off; the roof ’s been blown off. It’s now been boarded up. And there’s a lot of interior damage.”

And then the pandemic hit, adding to the uncertainty.

“It’s been a strange and crazy year – really almost a year and a half,” Kitner said Friday.

Even as recently as September, Kitner said the chamber was still trying to figure out what was next – like much of the southwest corner.

But ultimately, chamber leadership explained at its Friday State of the Chamber virtual event, the chamber chose to place the property on the market.

“The building sale was completed just about the first of February … it’s done,” Charles Elk, NDCC’s past board chairman, said during the Zoom event.

“We have been at that site since 1979, in two different buildings,” said chamber president and CEO Ken Malcolmson. “So this was a real bittersweet moment in our history. But on the other hand, it has positioned us very positively for the future.”

Malcolmson said that the sale of the property left the chamber with the ability to pay off the mortgage and “a significant amount of principle” that it will use to create an unrestricted endowment to pay for future lease expenses in another building.

“We will have a new home, but we will continue the great work the chamber has always done,” said board chair Tina Young.

Kitner said that generally, the chamber is looking at locations between Interstate 635, Northwest Highway, the Dallas North Tollway, and U.S. Highway 75.

Chamber leadership hopes to be able to make a decision next month, and be in the new space by July.

“We’ve got some great options to consider,” Malcolmson said. “It’s about time. We can see a light at the end of the tunnel.”