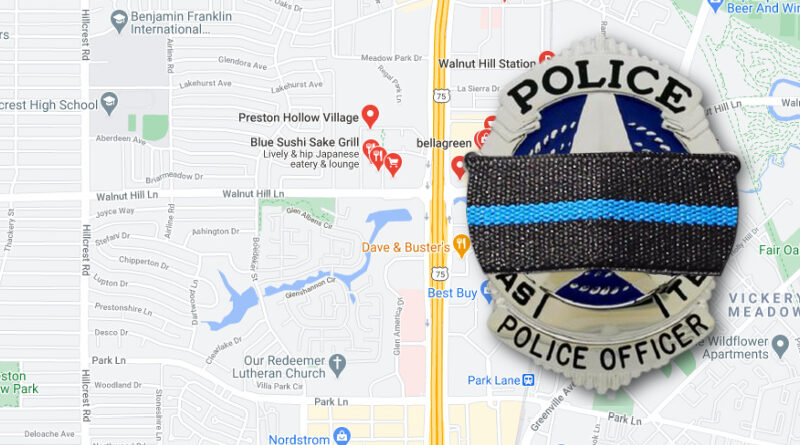 A Dallas police officer directing traffic after an earlier accident was struck and killed overnight at U.S. Highway 75 near Walnut Hill Lane, the department said.

Officer Mitchell Penton was hit by a car traveling at a high rate of speed around 1:45 a.m., officials said, while assisting at a prior accident in the northbound lanes of the highway.

The four-door Kia Forte hit Penton, who the department said was a officer trainee, while he was standing outside his marked patrol vehicle with its emergency lights on. A statement by the department said that the Forte crashed into Penton’s squad car, which then hit the officer.

The driver, a 32-year-old man, was allegedly intoxicated and was arrested with pending charges after being seen by medical staff and released.

The female passenger was taken to an area hospital for minor injuries that included laceration on her face, and was later interviewed by police.

“Our department is once again mourning, but we are heartened by the strength of his family. Godspeed my brother,” said Dallas Police Chief Eddie Garcia in a tweet.

“Tragic night for us. This, a small sign of respect and admiration for a fallen brother and his family,” he added in a subsequent tweet. “Thank you to all Fire/EMS and to Baylor Medical Center for your tireless efforts. Rest easy, hero. We’ll take it from here.”

The department said Penton joined the department on Feb. 6, 2019, and was assigned to the Northeast Patrol Division.

“Our hearts are heavy right now,” Garcia said in a statement. “This young officer had such a bright future ahead of him. We asked that the community join us as we pray for the officer’s family. We would also like to extend that prayer to the brave men and women of this great department.”

“Dallas mourns today over the devastating loss of one of our police officers,” Dallas Mayor Eric Johnson wrote on Facebook. “He died far too young, but the measure of a life is not longevity, but what someone does with the time they have. And this officer dedicated his time to serving our great city in an inherently dangerous job. We are forever indebted to him and forever heartbroken by this tragedy.

“I am praying today for his family, friends, and colleagues. I know our city will provide them with love and support as we seek justice.

Shortly before 11 a.m. Saturday, Gov. Greg Abbott expressed his condolences to the officer’s family and to the Dallas police department.

“Our hearts are with the family and loved ones of the Dallas Police Department officer who was killed in the line of duty this morning,” said Abbott. “This terrible loss is a solemn reminder of the risks our brave law enforcement officers face while serving and protecting our communities. Cecilia and I ask our fellow Texans to join us in lifting up the officer’s family and the entire Dallas Police Department in prayer during this difficult time.”