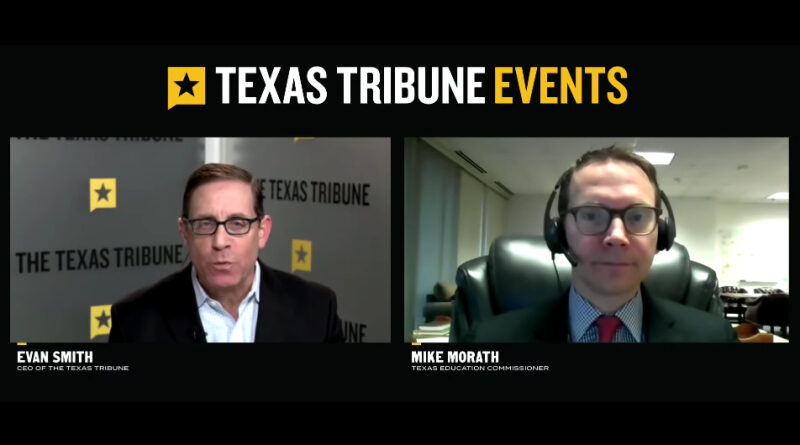 Elementary and middle school students learning online don’t necessarily have to take the State of Texas Assessments of Academic Readiness (or STAAR) test this year, Texas Education Commissioner Mike Morath seemed to say at a Q&A with the Texas Tribune Thursday.

The TEA released guidance for the school year for students taking the standardized test given to students in for third through 12th grades in person. Districts will be given more time to administer the test, the option to have students not scheduled to take the test learn remotely during testing days, and the option to set up alternate testing sites to adequately distance students.

During the discussion with Tribune CEO Evan Smith, Morath said that if remote learners want to take the test, they’ll have to come on campus because Texas doesn’t have the “logistical ability to do the STAAR remotely.”

If a family does not want to send their elementary or middle school virtual learner to campus for the test, they don’t have to.

However, this latest clarification is not true for high schoolers, who still need to take the STAAR as part of their end-of-course graduation requirements. Fifth and eighth graders usually need to pass the STAAR to be promoted to the next grade, but Gov. Greg Abbott announced this summer that the state would waive that requirement for those grades this year.

In January, State Rep. Diego Bernal filed a bill in January that would allow seniors to graduate without taking the STAAR this year. Bernal also wrote a letter in February that was signed by a bipartisan house group that included Morgan Meyer, asking that the TEA cancel the test altogether.

“We should not be requiring testing when our teachers and families are still struggling through this public health crisis,” Meyer said on Facebook.

We will have more on the STAAR exam in our next issues of Park Cities People and Preston Hollow People.