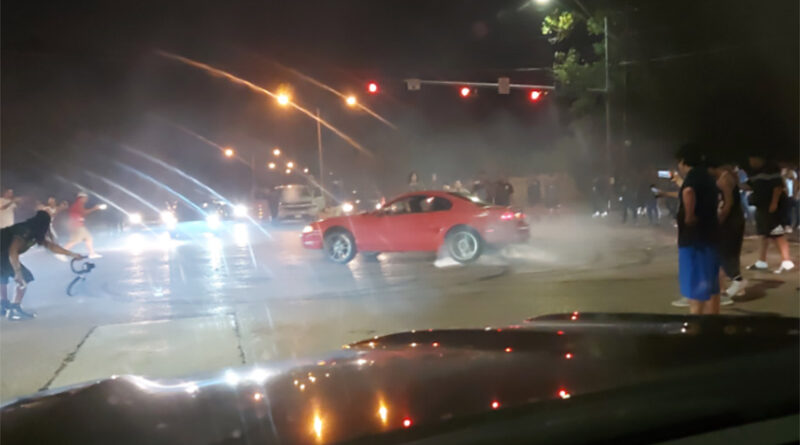 It happens again and again. On any given night, my neighbors and I can hear the loud squeals of tires grinding on asphalt and the revving motors of cars as their drivers take over the intersections along major thoroughfares in Preston Hollow and the edges of the Park Cities.

And a quick check of Dallas police active calls will tell you one thing – officers are dispatched nightly and continuously to locations all over the city.

Most recently, the takeover drivers – who are called “swingers” – blocked off Northwest Highway and Preston Road, drivers taking turns showing off abilities to swing and slide a car in circles around an intersection.

In this case, one driver lost control, and crashing into a utility pole at the northeast corner of the intersection, in front of The Laurel apartment complex. The crash upended the pole and sent it into Preston Road, showering the area with sparks and a brief flash of fire.

But will that change with a new police chief in Dallas? During my research into street racing, I had bookmarked some stories about what San Jose, California, had done to address their street racing and street takeover problem.

I took another look at those stories.

Let me preface this by saying that I don’t know that Garcia will ask the Dallas city council to expand its existing ordinances. But what Garcia has said about the San Jose approach could give an idea as to what he might bring to the table when it comes to Dallas’s problem.

“State law provides ample basis to enforce against participants in street racing, but the department currently struggles to enforce against spectators,” he wrote in a memo to the San Jose city council at the time. “Given the important role spectators play in encouraging, popularizing and facilitating these events, discouraging their participation would be an important step in combating the problem.”

In May 2019, San Jose passed an ordinance that fines spectators $1,000, and also tacks on a potential six months of jail time.The ordinance defines a spectator as someone within 200 feet of the takeover, or anywhere preparations are being made. Vehicles involved in takeovers can be impounded for up to 30 days, resulting in additional fines.

The city also doubled its police task force that addresses the street takeovers and racing, narrowed lanes, and enacted other traffic calming measures.

Dallas has passed a similar ordinance, but it levies a $500 fine, and no jail time. As of December, the department has issued 600 citations. The department says it has beefed up its street racing task force, and is also regularly talking to other large urban cities also dealing with the issue.