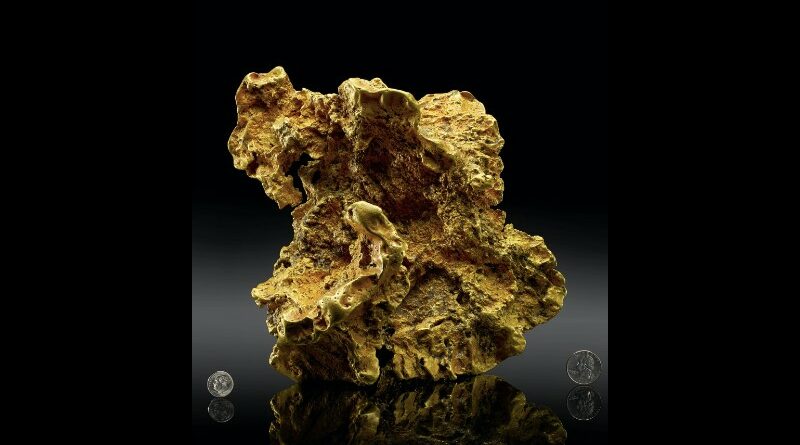 With a combined weight of more than 110 pounds, two rare gold pieces originally unearthed in Australia are now on display at the Perot Museum of Nature and Science.

The largest piece – dubbed the Dragon’s Lair – tips the scales at 63 pounds making it one of the largest specimens to come out of the richest gold finds in Australia. This is the first time Dragon’s Lair has been on view at any museum. Its smaller companion – known as the Ausrox Nugget – weighs in at a whopping 51.29 pounds and is about the size of a basketball.

“For thousands of years humans have treasured gold for its beauty and abundant properties. I remember panning for gold as a child and being excited to take home a tiny vial of flakes, so to see the lustrous beauty and sheer size of the Dragon’s Lair and Ausrox nugget is truly captivating,” said Kimberly Vagner, director of the Gems and Minerals Center of Excellence. “What a thrill to be able to display these two extraordinary specimens together!”

Dragon’s Lair hails from Western Australia and was discovered in 2018 at the Royal Nickel Corporation’s Beta Hunt Mine in Kambalda, a goldfield which has produced more than 20 million troy ounces (roughly 1.3 million pounds) of gold since 1897. Although the mine was predominantly producing nickel at the time, the company knew of the potential to discover gold.

Initially, a large boulder of quartz encasing gold, the enormous Dragon’s Lair emerged through the work of expert technicians at the Collector’s Edge in Colorado. The “rock doctors” began the cleaning process by envisioning how the gold lay within the large boulder. After X-rays and hours of visual scanning, an approach was designed to best bring out the piece’s aesthetics. Taking place over hundreds of hours, the process involved several cycles of incising, acid etching, and iron removal.

Following exposure of the leaves, some of the quartz was carefully sealed and the piece was immersed in hydrofluoric acid. This acid “eats” quartz and the unsealed areas were quickly dissolved away. After this acid treatment, more gold detail could be seen emerging from the boulder. After acid etching, the piece again underwent stylus work to remove acid residue and to further bring out the aesthetics of the gold. The rock experts discovered small amounts of other minerals buried within the quartz like calcite, feldspar and pyrite. Some of these minerals turned brown during the etching process.  The brown material, a form of iron, was removed with a special chemical treatment to re-whiten the specimen and brighten the gold.

The Ausrox Nugget was discovered in the Eastern Goldfields of Australia by three prospectors using a hand-held metal detector. This marks the third time the famed Ausrox has been on display at the Perot Museum. It debuted as part of the original collection in the Lyda Hill Gems and Minerals Hall when the Museum opened in December 2012. In 2015, the mineral headed to the Houston Museum of Natural Science, returning to the Perot Museum in 2017 before it went back to the Houston Museum of Natural Science in 2019.