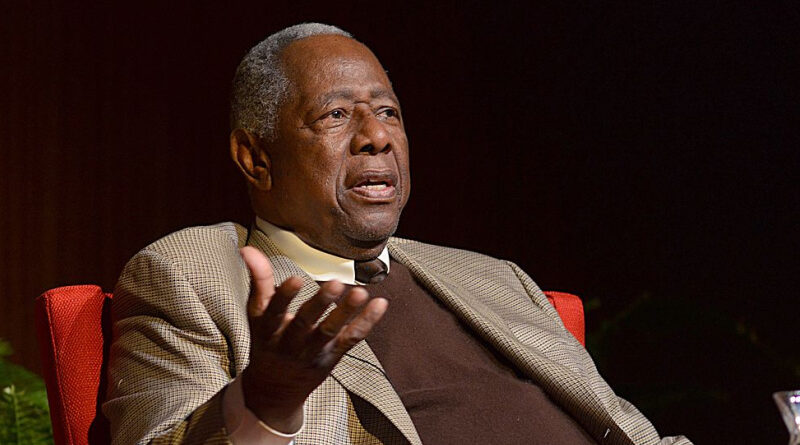 Hank Aaron, who left his indelible mark on baseball, and in doing so also provided a lasting legacy for racial justice, died Friday. He was 86.

Aaron became the subject of racist threats as he moved closer to breaking Babe Ruth’s home run record, and continued to encourage generations of Black Americans throughout his life.

“His career demonstrates that a person who goes to work with humility every day can hammer his way into history – and find a way to shine like no other,” said Major League Baseball commissioner Rob Manfred.

In fact, he was doing that even up to two weeks or so before his passing, publicly receiving the COVID-19 vaccine so he could demonstrate that they were safe.

“I don’t have any qualms about it at all, you know,” he told the Associated Press. “I feel quite proud of myself for doing something like this. … It’s just a small thing that can help zillions of people in this country.”

The Atlanta Braves, where Aaron spent a large portion of his career, said he died peacefully in his sleep. No cause was given.

While his career spanned 23 years and an incredible amount of accolades, one of the most enduring images of his storied career was the moment in April 1974 when he surpassed Ruth’s home run record, earning the crown of home run king with his 715th home run. He’d finish his career in 1976 with 755 homers, and would hold on to that record until 2007 when Barry Bonds surpassed it.

His quest to 715 was punctuated by threats. Ruth was White. Aaron was Black. The threats were bad enough to require bodyguards.

When he retired, he had amassed some incredible stats – 14 seasons with a .300 average, two National League batting titles, seven seasons with more than 20 stolen bases (including 31 in 1963), a National League MVP (1957), 21 consecutive appearances in the All-Star Game, and three Gold Gloves.

He was elected to the Baseball Hall of Fame in 1982 – the first year he was eligible. The award given to the top hitter in baseball was named after him in 1999. In 2002, he was given the Presidential Medal of Freedom by then-President George W. Bush.

Friday, Bush offered his condolences to Aaron’s family, thanking them “for sharing this great man with our country.”

“Laura and I are saddened by the passing of Hank Aaron,” Bush said. “The former Home Run King wasn’t handed his throne. He grew up poor and faced racism as he worked to become one of the greatest baseball players of all time. Hank never let the hatred he faced consume him.

“Henry Louis Aaron was a joyful man, a loving husband to Billye, and a proud father of six children who will deeply miss him.  Laura and I send them our condolences and our thanks for sharing this great man with our country.”

“RIP Henry Aaron. A true giant in American culture,” wrote Michael Young on Twitter. “Thank you for inspiring us through your courage, determination, and selflessness. Every former, current, and future player owes him a massive debt of gratitude. May his one of a kind legacy live on. Thank you, Hammerin’ Hank.”

The Baseball Hall of Fame eulogized Aaron in a video.

More reaction to his passing: