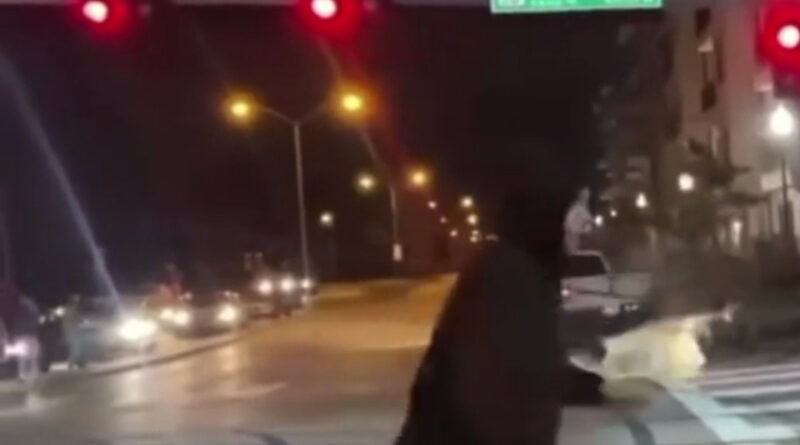 Roughly 10 readers sent a link to a video on Reddit taken Saturday night that shows a street takeover gone awry as a truck hits a utility pole, sending it into the street in a flurry of sparks.

In the video, a group of drivers have blocked off access to the intersection of Northwest Highway and Preston Road, allowing participants – who refer to themselves as “swingers” – to perform in a “slideshow,” or a demonstration of their abilities to swing and slide a car in circles around an intersection.

In this case, one driver loses control, and crashes into a utility pole at the northeast corner of the intersection, in front of The Laurel apartment complex. The crash upends the pole and sends it into Preston Road, showering the area with sparks and a brief flash of fire.

The entire video is below (warning, several expletives are shouted during the video).

One nearby resident said they called police several times, saying that the whole incident could’ve been worse if the pole had fallen closer to the apartments.

“I called Dallas police three times in a 15 minute period before this happened (and) no DPD units (came) until 15 minutes after,” he said, adding that the nearby fire department showed up first.

Two incident reports were filed by Dallas police. The narrative in both indicates that the driver fled north, and that Oncor was called to send units out to remove the debris from the crash from the roadway.

A DPD spokesman said it was unclear yet if the department’s racing/speeding task force had responded as well.

A call to Oncor revealed that on a cursory look, no power outages were reported in the area.

In October, People Newspapers took a look at the increased incidents in the Preston Hollow area.

Dallas police spokesperson Melinda Gutierrez said at that time that the department’s speed racing task force has “written thousands of citations and made numerous arrests.”

“A person can face fines and/or jail time for participating in street racing,” she said. “It is also now illegal to be a spectator of street racing. Residents can call 911 to report it if it is actively occurring or if it is a known location, it can be reported through 311 or our iWatch Dallas app.”

Last month, Matt Goodman with our sister publication D Magazine, talked with two “swingers,” who indicated that not much would stop them from continuing the takeovers of intersections, illustrating the issues that make it difficult to put a stop to the problem.