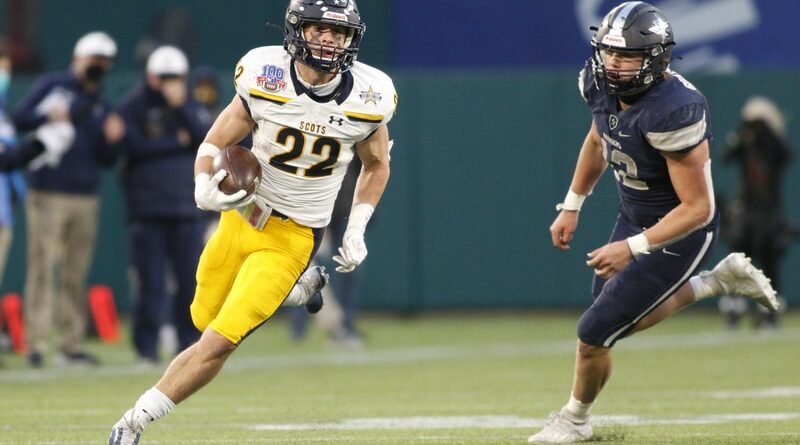 ARLINGTON — Highland Park got revenge on Thursday, but more importantly, the Scots took another important step forward in their quest to return to the Class 5A Division I state championship game.

HP held off Frisco Lone Star 30-20 in a Christmas Eve matinee at Globe Life Park, eliminating the opponent that beat the Scots twice last year, including a playoff ouster.

The reward for the unbeaten Scots (11-0) is a return trip to the reconfigured former home of the Texas Rangers for a showdown against either Denton Ryan or Longview on Jan. 1 in the Region II final.

The Scots jumped out to their customary big lead in the first half, then withstood a Lone Star rally behind a handful of key plays on both sides of scrimmage.

“I thought we did a good job of keeping our poise and playing hard at the same time,” said HP head coach Randy Allen. “It was a very physical game. We ran the ball hard and threw it well when we had to.”

Brayden Schager tossed a pair of scoring passes to Will Pettijohn, while Brooks Bond led a potent rushing attack with 103 yards and a touchdown. HP was excellent on third down in particular.

On defense, the Scots recorded a safety to swing the momentum in the third quarter, and grabbed two interceptions in the fourth quarter to help seal the victory.

After an early interception, the Scots reached the end zone on three of their next four possessions. Schager’s 19-yard touchdown pass to Pettijohn capped a 93-yard drive to start the scoring, and Anthony Ghobriel’s 8-yard scamper made it 14-0 early in the second quarter.

The most critical touchdown came in the final minute of the first half, when Schager and Pettijohn connected on a touchdown strike on third-and-goal from the 11.

“Our defense played great,” Allen said. “They’ve played great all year. That’s an explosive offense. To hold them to 20 points is quite an accomplishment. We did a good job holding down the big plays.”

The Rangers (7-4) trimmed the margin to 21-12 to start the third quarter on a 4-yard scoring run by Jaden Nixon.

An HP miscue caused the ensuing drive to stall near midfield, but Jack Stone’s punt pinned Lone Star at its own 2-yard line. And on the next snap, Patrick Turner stuffed Nixon behind the goal line for a safety.

The Scots went into ball-control mode from there, consuming almost six minutes with a 14-play possession that culminated in Bond’s 2-yard touchdown plunge. Bond ran the ball 10 times on the drive.

“We thought our offensive line was good enough to control the line of scrimmage,” Allen said. “We needed to wear them out and keep the ball away from them. We made a beautiful drive in the second half.”

Following a late interception by Lone Star’s Blake Gotcher, the Rangers added a fourth-quarter touchdown on a short pass from Garret Rangel to Ashton Jeanty.

Nixon, an Oklahoma State signee, never found much running room against the HP defense. He finished with just 42 total yards after recording 230 (and four touchdowns) last week against Magnolia. As a team, the Rangers had zero rushing yards in the first half.

Rangel wasn’t as effective against the Scots in the rematch, either, although he amassed 245 yards on 21-of-32 passing. Jeanty caught 11 throws for 113 yards, while New Mexico signee Trace Bruckler had four receptions for 85 yards.

The Scots accumulated 118 penalty yards and had just 95 yards of total offense in the second half. However, Schager found eight different receivers with his 16 completions, and Pettijohn racked up a team-high five grabs for 84 yards.