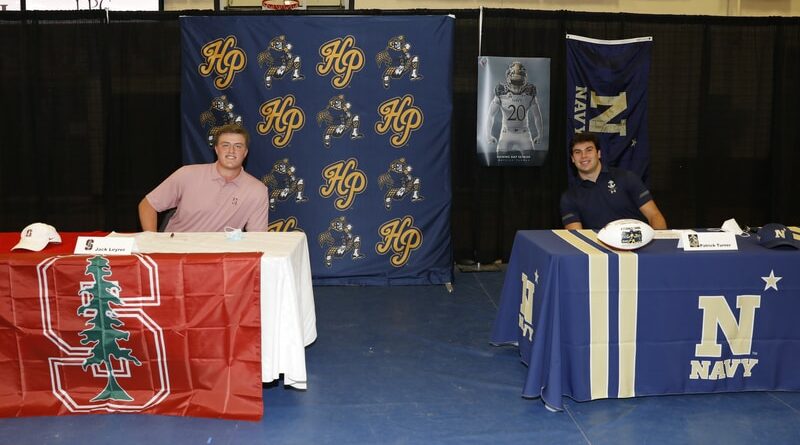 Jack Leyrer wanted to choose a college where he would be challenged in the classroom on weekdays, and compete against future NFL defenders on Saturdays.

Stanford checked all the boxes for the massive Highland Park offensive tackle, who signed with the Cardinal on Wednesday — the first day in the NCAA early signing period for football players in the 2021 class.

“From the get-go, I knew that academics and playing football at the highest level was what I wanted to do,” Leyrer said. “It’s a wonderful opportunity.”

Leyrer was recognized during a ceremony at the school alongside HP linebacker Patrick Turner, who finalized his commitment to play at the U.S. Naval Academy.

At 6-feet-7 and 280 pounds, Leyrer has provided blind-side quarterback protection and anchored the offensive line for the Scots for the past two seasons. That unit has been instrumental in HP’s success on offense this fall.

Leyrer missed his freshman season after a freak accident. He was hit in the head with a golf ball and fractured his skull.

However, he came back strong as a sophomore, joining the varsity squad for a playoff run that included a Class 5A Division I state title. He has started at left tackle for the past two years.

Leyrer received a scholarship offer from Stanford in the spring, and committed shortly after visiting the campus during the summer.

“Jack is one of the best we’ve had,” said HP offensive coordinator Grayson Wells. “He’s gotten better every year. He’s an example to other players.”