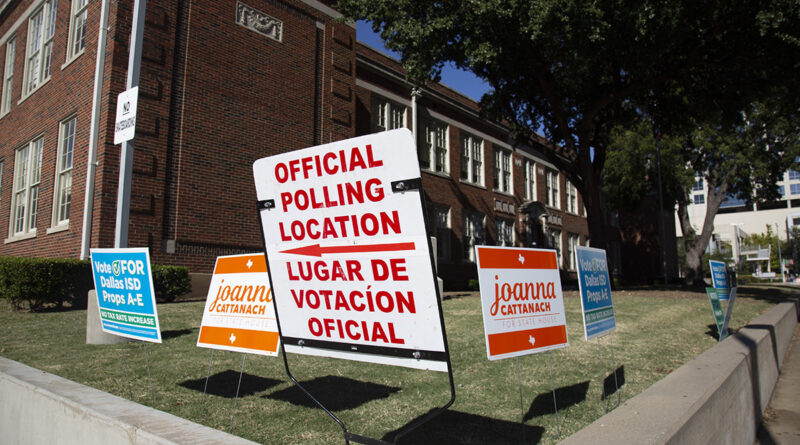 If you didn’t live in Dallas ISD District 2, you might not have been aware that there was an election yesterday. We take a look at that, plus the latest COVID-19 numbers, in today’s digest. Here are your bullet points:

The Nov. 3 election results found challenger Nancy Rodriguez holding a lead throughout the evening with around 45% of the vote to Marshall’s 40%.

“I am deeply grateful for your vote, and I take the responsibility that you’ve bestowed upon me very seriously,” he said. “Election season can strain relationships among neighbors who disagree with one another on their preferred candidate, but as we turn the page on another election season, I hope we can all quickly transition to a focus on a shared passion to give our students the best education possible.”

“She made a very gracious call last night, and I told her that I look forward to working with her to advance student outcomes, and that I’m grateful for her continued service as my appointee to the Special Education Advisory Committee,” he said.

Election season can strain relationships among neighbors who disagree with one another on their preferred candidate, but as we turn the page on another election season, I hope we can all quickly transition to a focus on our shared passion to give our students the best education possible.  I know that all of us – whether I was your chosen candidate or not – believe that adults who have the energy, the passion, the knowledge, and the political will to change the future for our children – can accomplish anything!  I look forward to working with all of you to make the future bright for all of our kids!”

In 2017, Marshall upended then-challenger Lori Kirkpatrick in a runoff election 71% to 29% – after she came within 23 votes of the required 50% threshold to beat him in the general election.

In 2016, Marshall faced off against Mita Havlick for the seat, which had been vacated by Mike Morath as he moved on to the top post at the Texas Education Foundation. The general election found three candidates – Suzanne Smith, Havlick, and Marshall – all vying for District 2. Havlick beat Smith by only 50 votes to enter the runoff, and then was beaten by 42 votes.

The county said that the number of COVID-19 hospitalizations Monday was 766 patients. Emergency room visits for COVID-19 symptoms represented about 20% of all ER visits, according to information reported to the North Central Texas Trauma Regional Advisory Council.

Since Nov. 1, the county said there have been 5,320 COVID-19 cases in school-aged children and staff from 770 different K-12 schools in the county, including 849 staff members. Last week, 13 schools temporarily closed their campuses to in-person instruction.

The county is also reporting 97 active outbreaks in long-term care facilities, with 927 cases reported in the past 30 days, including 309 staff members. Of those cases, 29 have died, including two staff members.

Congregate living facilities like homeless shelters and group homes have also seen an uptick in cases, with 22 outbreaks associated with 168 cases, including one facility with 87 confirmed cases.

“Today we had another 1,105 COVID positive cases and eight deaths, ranging from a man in his 20’s to a man in his 90’s,” said Dallas County Judge Clay Jenkins. “The weather will be nice the next few days and I hope that everyone will be able to get outside and exercise at a six-foot distance. Remember that when you’re not at home and inside any building, including your own office building, doctors strongly recommend that you be masked for the duration of the time that you’re in the building.

“Also, remember that to the extent possible, all workers should try to telecommute during this time of high community spread,” he added. “Meetings with individuals outside your own home should be put off until the numbers are more in control, but should meetings occur, outdoor meetings are preferable to indoor ones.”