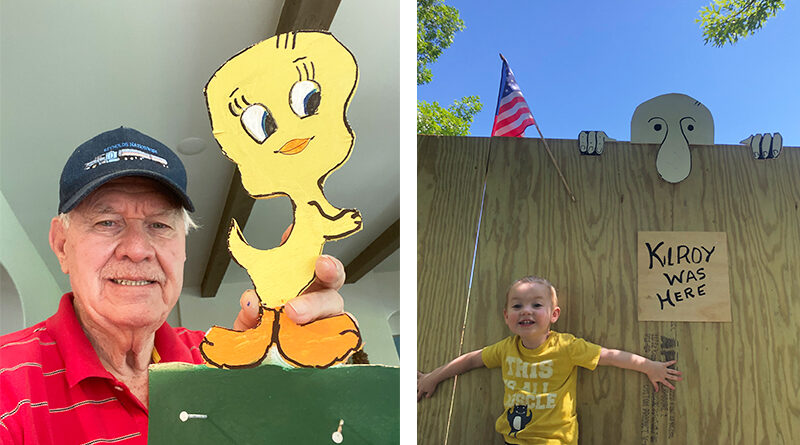 Since attending college at the University of Texas, University Park resident Max Dillard has drawn cartoons.

After graduating, his collegiate side hustle turned into a consistent pastime with Dillard continuing to draw for his benefit and illustrating various projects.

When he became a grandfather, his cartoons found a new purpose, serving as gifts for his grandchildren and entertainment for the entire family.

“It’s been fun to see everyone looking at the fence toons’ and to receive requests from my neighbors on what character to draw next.”

With the recent pandemic confining him to his home alongside Caruth Park, Dillard decided to share his lifetime hobby with the neighborhood by hanging cartoons on the park fence.

“University Park put up an eight-foot fence, which ended up blocking our view of the park, and I wondered what to do with that blank, green wall,” Dillard said. “Memorial Day was coming up, and I wanted to do something to celebrate all of the veterans, so I made my first ‘fence toon.’”

For Memorial Day, Dillard carved and drew a depiction of the military graffito “Kilroy,” which was popular with American soldiers during World War II and was often accompanied by the tag “Kilroy Was Here.” Following Memorial Day, Dillard continued to make a ‘fence toon’ each week with subjects ranging from the construction workers seen near his house to cartoon classics like Yosemite Sam and Donald Duck.

“With each ‘fence toon,’ we saw more people coming to see them,” Dillard said. “Whenever I put a new one up, my neighbors would come to see what the new cartoon was. Some parents made it a game with their kids to see how many cartoons they could name.”

To begin his process, Dillard first draws the cartoon of his choosing either from a reference photo or memory. Then, he transfers that drawing by tracing it onto a sheet of plywood, which will be the base of the ‘fence toon.’ Once done, the plywood is painted and left to dry before it is completed and nailed to the fence.

“It’s been fun to see everyone looking at the ‘fence toons’ and to receive requests from my neighbors on what character to draw next,” Dillard said. “I’m through making them, but I definitely think they have helped to bring the community (together) during this time.”

After over three months of ‘fence toons,’ University Park has notified Dillard that the fence he has been using to display his creations will be taken down shortly. Despite their inevitable removal, however, the neighborhood will still remember the 13 ‘fence toons’ and the impressions they left behind.

Shaye Wattson began her senior year at Highland Park High School in August and returned to campus on Sept. 9.