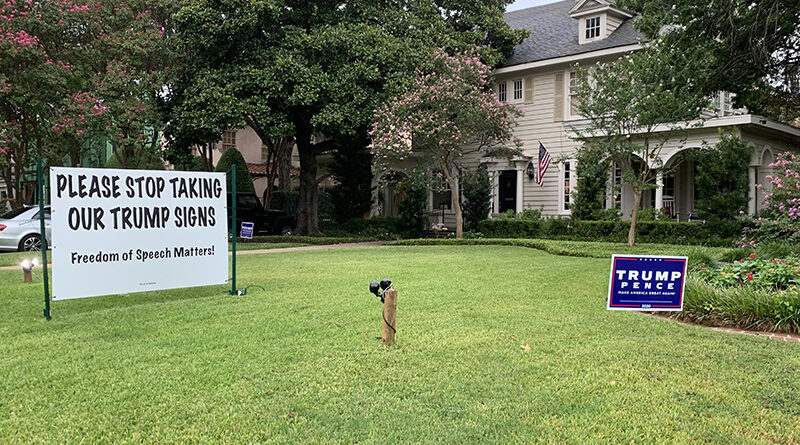 It’s presidential election season, and with it can come some neighborhood political tensions.

The Highland Park Department of Public Safety reported one incidence of theft of a political sign in 2016, three in 2018, and two in September of this year.

A Highland Park  man who lives in the 3400 block of Beverly Drive made headlines for a large sign in his yard that reads, “Please stop taking our Trump signs —Freedom of Speech Matters.”

Another Beverly resident wrote us about three thefts at his home. “Apparently there are some morally indignant, holier-than-thou, self-righteous, arrogant, elitist, individuals who believe that no one has the right to support Trump,” Karl Ziebarth said. “Join me in denouncing these petty thieves who think they are so pure and holy!”

The Highland Park Department of Public Safety reported a thief taking a “Black Lives Matter” sign from a yard in the 3500 block of Crescent Avenue on June 12.

Another sign was taken from a yard in the 3500 block of Euclid Avenue, also on June 12.

Mystery of the Snider Plaza Stump