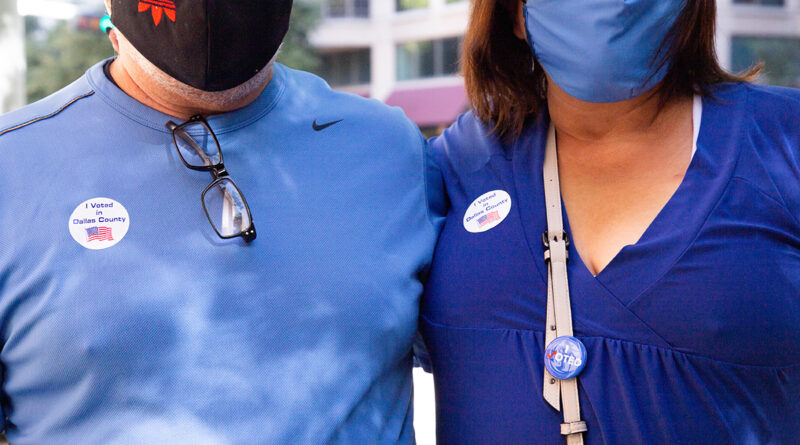 The polls open at 7 a.m. Nov. 3 for what will be, by just about everyone’s estimation, an extremely busy Election Day. If you’re planning to cast your ballot, we have a few things you should know.

You can vote anywhere in Dallas County on Election Day. Live in University Park but work downtown? You can walk into any polling location along the way and vote. Want to know the polling locations closest to you? We’ve compiled a list, but you can also go to the county elections website for a map with wait times.

The polls open at 7 a.m. and close at 7 p.m., but if you’re still in line at 7 p.m., you should stay in line – you have the right to vote as long as you were in line by that time. Also, your employer must allow you time to vote.

Pack a snack – and your patience. Fully charge your phone (but remember to put it on silent and tuck it in your pocket when you get close to the entrance of your location). Maybe take a camp chair. Pack some sunscreen. There could be a line – and you should be prepared to wait in one. Our advice? Vote with a buddy if you can, that way if you do need those camp chairs, one person can hold your place in line while the other runs to the car to snag them and then return them. But do take snacks and water, make sure you’ve got some sunscreen on, and maybe bring a good book.

How do I know if I’m registered to vote? Head here.

What if my driver’s license is expired or I’ve moved? If it’s less than four years past its expiration, you can still use it. If you are 70 or older, the ID can be expired for any amount of time.

There is no address matching requirement, according to the Secretary of State’s website.

I thought I wanted to vote by mail, but I’ve changed my mind. Can I vote in person? Yes. If you decide to vote in person, simply take your mail-in ballot – and word to the wise, take everything that came with it. The poll workers at your polling location can cancel that ballot, and you can vote in person.

I never got my mail-in ballot, or I filled it out and mailed it, but it hasn’t reached its destination yet. What do I do? Go to the polling location of your choice, and tell them you haven’t received your ballot or it hasn’t shown up as counted. You can then fill out a provisional ballot. The ballot board will review it, and then double-check to make sure the original mailed ballot was never cast. If that’s the case, your provisional ballot gets counted.

How do I know my ballot was counted? There is no state-provided way to check, but VoteAmerica has created one for Texas.

And if you’re military voting from overseas, you can check the status of your ballot here.

What if I have been diagnosed with COVID-19 and haven’t voted yet? If you’ve been diagnosed and are loathe to break quarantine to vote, you have a couple of options. Keith Ingram, Director of Elections with the Texas Secretary of State, said this Spring that election code authorizes late voting if a voter becomes sick or disabled on or after the day before the last day for submitting an application for a mail-in ballot and is unable to go to the polling place on Election Day.

How does that work? “The voter must designate a representative to submit an application on the voter’s behalf in person to the early voting clerk,” Ingram said. “The application must be received before 5 p.m. on Election Day.

“The application is reviewed and the early voting clerk verifies the applicant’s registration status in the same manner as early voting by mail.”

But if that won’t work, Dallas County elections administrator Toni Pippins-Poole said curbside voting is also an option for those exhibiting symptoms of COVID-19 – such as fever, cough, chills, loss of taste or smell, shortness of breath, and/or known close contact with someone who has tested positive for the virus. Curbside voting is available at every polling location.

“We ask that if voters who exhibit any of the above-mentioned symptoms associated with COVID-19 consider utilizing curbside voting, to the extent they meet the eligibility requirements,” Pippins-Poole said in June.

When you arrive at the curbside location, a phone number will be provided at the curb, and a voter can simply call it to alert the election judge of the request.  A poll worker will verify the voter’s registration (just like they would if they voted inside), then take a voting device to the car with a balot, voter ticket, and secrecy envelope. The voter can then mark their ballot, place it in the envelope, and the poll worker then deposits it in a ballot counter.

When will we know who won? That is the $500 billion dollar question. But don’t worry that the potential of waiting a few days before we know definitively means the election is somehow “rigged.”

A lot of people have voted, and a lot of people will likely vote tomorrow. That takes time. If there are long lines at 7 p.m., polling locations will have to wait for those voters to cast their ballots, too. And with so many races at statistical dead heats in the state, it is likely that it will take time to certify those results.

Here’s how it works – counties with populations over 100,000 are already reviewing their early absentee ballots. But since ballots can arrive as late as Nov. 4, counting will continue on those.

For in-person ballots, counties manually enter their vote totals into the state system. “They access a web-based application and put the numbers in one digit at a time, one race at a time,” Stephen Chang, spokesperson for the secretary of state’s office, explained to the Texas Tribune.

Early voting totals in Dallas County are usually released pretty much as soon as the polls close at 7 p.m. It’s estimated that most races will be tallied by Tuesday night, but with the aforementioned additional absentee votes that could trickle in, close races may have to wait a bit.

Once the results are tabulated, the state conducts an audit. Some areas – specifically those who use electronic voting systems that don’t offer paper records of the vote – will have to canvass (also known as a partial recount) by Friday, in three precincts or in 1% of the precincts (whichever is larger). Canvassing must be finished by Nov. 24.