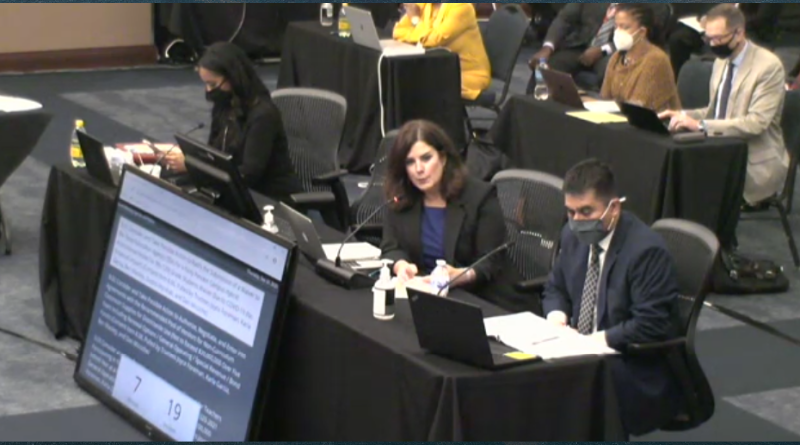 It was a busy Thursday night for the Dallas ISD school board, and thanks to a late start, the trustees almost found themselves deliberating right into Friday.

An earlier meeting for employee hearings ran late, the district said, which meant that the meeting didn’t start until well past 7 p.m., and then as soon as the board gaveled in for its regular meeting, it went into closed session.

But when it got down to business, Superintendent Michael Hinojosa told the board that the district’s enrollment losses are lowering as staffers are able to make contact with families and get more students back on board. The district is 7% from its targeted enrollment now overall, he said, and closing in on 6%. What is more concerning, he said, is that while high schools are at about 2% from the target, pre-K is at 33%.

Hinojosa also announced that the district was going to launch a COVID-19 case tracker, as well as a construction tracker that will allow the public to look at the progress on any district construction project at any time.

But the district’s reentry plan, including a move to a hybrid plan for high schools and one elementary school – Lakewood Elementary – took up the bulk of both the meeting itself, starting with the public comment portion, where teachers and staffers reiterated their worries about returning to campus, and parents at Lakewood chafed at what several called “being singled out” for the hybrid plan when other elementary schools will be able to open for five-day instruction.

At Lakewood, more than 82% of families who responded to the district’s survey indicated they wanted to come back to campus, and the district said that put them well above the threshold that would allow students and teachers to adequately distance.

But several teachers also commented. Several said that adherence to the district’s safety plan varied wildly from campus to campus, and that many teachers were unclear about proper mask etiquette.

“Ask five different teachers the proper mask etiquette, you’ll get five different answers,” one teacher said, adding that a nurse told him that the KN95 masks provided to them didn’t seal well enough to be safe.

Another teacher said that her asthma should give her clearance to work from home, but her request for an alternate work arrangement was denied – a common refrain from several teachers.

“My request is about preserving my life,” she said.

Others said that they worried that safety guidelines and social distancing weren’t robust enough for bus drivers and monitors.

A community member asks why the district doesn’t have proper safety guidelines, like no social distancing, for bus drivers and monitors. The situation disproportionately affects black employees, he says.

Parents and grandparents said they worried that cleaning efforts between the times one cohort leaves and another enters – for schools using a hybrid model – were not stringent enough. Another says she is worried that the district isn’t being transparent enough about what it will consider close contact between an infected student and other classmates and their teachers.

“Is the district going to take care of my funeral arrangements?” a grandmother asked, saying she is comfortable with the precautions her family is taking but is not so sure that her grandchildren’s classmates are doing the same.

Ultimately, the board approved a plan that will have high schoolers going to school in two groups – one group on Monday and Tuesday, another on Thursday and Friday, with Wednesday as a flex day that will allow schools to help distance learners who need to come on campus for various testing or services, for instance.

Trustee Joyce Foreman questioned Dallas ISD chief of school leadership Jolee Healey on whether parents had been adequately informed that the hybrid model was an option. Healey admitted that it wasn’t mentioned on the district’s survey, but that the district had consulted with Dallas County health officials about the hybrid plan, and the county had advised that a hybrid plan was preferable if the district reopened schools.

Both Foreman and trustee Dustin Marshall pressed Healey on whether all 26 high school principals had advocated for the hybrid plan. Healey said that almost all had – only one had expressed that her campus population was small enough that she felt they might be able to reopen for five-day instruction safely, and that the district was going to work with her to potentially accelerate that school’s move to that.

Four principals were on hand, and trustee Karla Garcia asked them to explain why they feel the model is the best option at this point. Their explanations mirrored what trustee Maxie Johnson said he found to be true when he spoke with several of the principals in his district. Trustee Ben Mackey also said he felt that principals wanted the model.

Healey also explained that on-campus learners will still be online, but not in the same way that remote learners are. The district has long said that it would attempt to allow for a seamless transition back to online only learning if a situation demanded it.

Lessons will be online, just as they are now with the remote learning model, but teachers will also be teaching in person, she explained.

The second major item on the agenda was the hiring of a new construction-manager-at-risk for the planned remodel of Thomas Jefferson High School, as well as the new pre-k through eighth grade Walnut Hill campus that will be built on the Cary Middle School site. All three schools were severely damaged in October’s EF3 tornado.

The board voted last month to cancel its contract with Core Construction “for convenience,” but there had been allegations about some misconduct regarding the company, which it denies.

But when it fired that company, it also stopped all work on the two sites. The new contract, which is with HCBeck, will be for $113 million, with $82 million of that being with Thomas Jefferson’s reconstruction.

This time around, both Johnson and fellow trustee Edwin Flores said they felt a little more reassured about the CMAR process. Both serve on the district’s audit committee, and said that the district’s auditor had brought on board a staff member who specializes in the CMAR method.

Johnson, who has voiced concerns regarding the hiring method, said that he does feel reassured that there will be accountability this time around, with Johnson saying that the new specialist means the auditor will keep an “eagle eye” on the project.

“I think the term I would use is ‘smothering,’” joked Flores, but agreed that the auditor had processes in place to monitor the project.

“The kids need to get back in their building,” Johnson said.